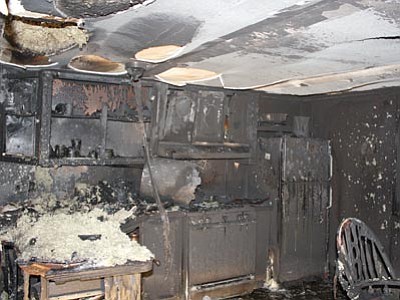 Chino Valley Police/Courtesy photo<br>The inside of a mobile home in Chino Valley shows the aftermath of Sunday’s fire.

CHINO VALLEY - Police have arrested a woman on an arson charge in connection with a Sunday night fire that destroyed a single-wide mobile home here.

The mobile home, in the Chino Valley Mobile Home Park in the 900 block of east Road 3 North, was heavily involved in flames when firefighters arrived at about 7 p.m., Chino Valley Fire District spokesman Rob Zazueta said.

Fire crews managed to get the blaze out before it could extend to other structures in the park, he said.

The mobile home itself, however, was a total loss, Central Yavapai Fire District Division Chief Rick Chase said, with about $24,000 in total damage.

Chase noted that firefighters were able to save a vehicle that was parked near the home.

White and her husband lived in the mobile home and a third person, a man, also was there Sunday night.

White "and others had been drinking alcohol throughout the day," Schaan said, and she got into an argument with her husband, and said "that she would burn the trailer down."

When the fire broke out, the third occupant ran outside, but White's husband was trapped in a bedroom and had to climb out a window with help from a neighbor, Schaan said.

The husband suffered minor injuries from the fire and being pulled out the window, Schaan added.

The fire still is under investigation, he said, but police suspect that White used an accelerant of some type.

White was booked into the Camp Verde jail, and police have referred the case to the Yavapai County Attorney's Office for review and possible additional charges.