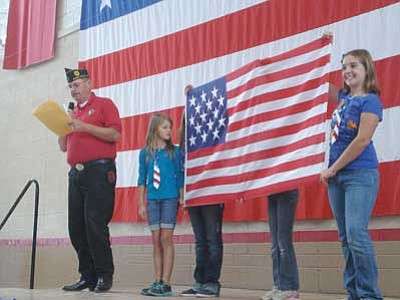 CHINO VALLEY - The good reputation of a school is built on academic strengths as well as traditions unique to the school's community. One special tradition at Del Rio Elementary School is the annual Veterans Day assembly.

Schools throughout the area honor veterans in various ways. What is unique to Del Rio Elementary School is the way community veterans have become a vital part of the assembly, according to a news release. This helps young students understand the meaning of veterans, patriotism and honoring those who serve our country.

Students are encouraged to invite a veteran who is a relative or family friend to join them at the assembly. Together they go up on stage where the child introduces the veteran to the gym full of over 1,000 students, staff and guests.

Many veterans have commented how grateful they were to look out over the next generation dressed in red, white and blue waving individual flags as their applause. It is the students who benefit most from this opportunity to connect the concept of 'veteran' with real people in the community. Veterans have ranged from young men and women in their 20s, who served in Afghanistan, to an old framed photograph of a veteran who fought in the Korean War shared by his granddaughter.

This year's assembly will be dedicated to the memory of Mr. Murrell Worth, former Commander of American Legion Post 40 in Chino Valley. He was instrumental in the connection between Del Rio students and community veterans.

Mr. Worth spoke at the assemblies for a number of years, sharing something about patriotism and veterans each time. He started his own non-profit organization through which Del Rio children donated small items like toys and school supplies at the assembly. Mr. Worth packaged them up to send to troops in Afghanistan who then in turn gave them to children there. Del Rio has received a special U.S. flag flown in Afghanistan, photographs of Afghan children receiving Del Rio gifts and letters from soldiers, all special connections from around the world.

This year's Veterans Day assembly will be held on Nov. 10 at 1:30 in the Del Rio gym. Del Rio Elementary School is located at 1036 N. Road 1 West in Chino Valley. The public is welcomed to attend.