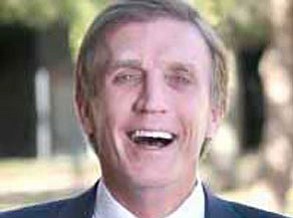 White House officials say they discovered hacking activity into the computers in the Oval Office. Nothing was taken. The hackers were identity thieves who peeked at the president's Oval Office laptop and saw his approval ratings and decided they were better off as themselves.

Jose Canseco accidentally shot off his middle finger as he was cleaning his gun and watching the World Series. It's only right. After Jose Canseco's tell-all book led to the end of the Steroids Era, he owed it to baseball to show how to make watching the game more exciting.

Charlie Sheen lobbied openly to be included in the final episode of Two and a Half Men this spring. He's gotten his act back together. He lives in a ranch house he just renamed the Sober Valley Lodge, located exactly where Whiskey River Creek runs into Crack Head Canyon.

The White House was reported considering flying in Ebola patients from Africa to the United States for hospital treatment. It doesn't seem fair. Five years ago the Obama Administration would not allow swine flu into the country for fear that it would offend Muslims.

The U.S. inspector who probed the Secret Service hooker scandal was himself caught with hookers Tuesday. How ironic is that. Eleven agents were fired over the hooker-and-cocaine hotel parties and the rest resigned because it wasn't going to be any fun to work there anymore.

CDC officials warned Thursday that the obesity epidemic is far more lethal to Americans than the Ebola craze. There are certainly exceptions. Last summer a doctor in Mississippi diagnosed one of his patients with the flesh-eating disease and gave the man forty years to live.

Ebola nurse Kaci Hickox defied Maine's home-quarantine order on Thursday and went for a morning bicycle ride with her boyfriend in the woods. The state and federal government froze out of fear of doing the wrong thing. ISIS just realized they didn't plan nearly big enough.

Krispy Kreme announced it will give away one free doughnut to anyone who comes to the store on Halloween dressed in costume. Weight counselors agree. If you're the type of person who's willing to go to the trouble to dress in a costume to get a free doughnut, you've hit bottom.

A Lubbock jewelry store offered a free handgun with a three-thousand-dollar engagement ring. It s a Texan's total commitment. The ring assures the woman he'll marry her and the handgun assures her that he will never walk in front of the TV set when the Cowboys game is on.

The U.S. Senate races across the country tightened over the weekend, making both parties nervous about mid-terms. It could be very close. The pollsters say the Senate is the Republicans to lose, and if anyone knows how to lose something that was theirs to lose, it's the Republicans.

Jeb Bush's son dropped a broad hint Sunday that his father plans to run for President of the United States next year. He's had to deny past affairs with a Playboy Playmate. He said as a Republican, the only people he's been in bed with are the tobacco industry and the gun lobby.

The New York Mercantile Exchange attributed the forty-dollar per barrel fall in oil prices in the last four months to reduction in gasoline usage. The worse the economy gets, the lower the price of oil. So if President Obama were given one more term in office, gasoline would be free.

Hillary Clinton fired up a Democratic rally Sunday by declaring that businesses don't create jobs before recanting it the next day. She strayed from her Goldwater Girl-Methodist-Tory true self to try to sound like a leftist. Nevertheless, Hillary can deliver the woman vote, and Bill can deliver the other-woman vote, and between the two of them, that's a lot of women.

Column: Canseco's finger grew back thanks to HGH
Column: Wheat bloat scarier than ebola to some
Column: TSA agents will get Ebola under control
Editorial: Ebola education needed, not 'czar'
Column: Give thanks to this old-time quartet
Event Calendar