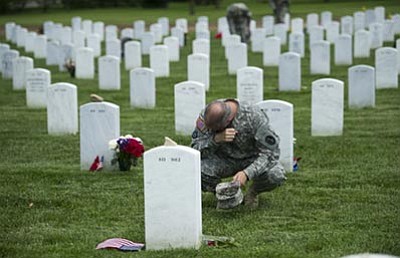 Army Col. Matthew Rasmussen, of the Army Military District of Washington, wipes tears from his eyes while visiting the grave of Army Staff Sgt. Richard Tieman, 28, of Waynesboro, Pa., as he and members of the 3rd U.S. Infantry Regiment, also known as The Old Guard, places flags at grave sites at Arlington National Cemetery as part of the annual "Flags-In" ceremony in preparation for Memorial Day, Thursday, May 22, 2014, at the cemetery in Arlington, Va. Tieman died May 18, 2010, in Kabul, Afghanistan of wounds suffered in a suicide car bombing. (AP Photo/Cliff Owen)

"It is D-Day plus five years, soldier, on this sandy coast where the world hinged on what you did.

"Because you did well here your world at home is as good as it is, and if it isn't any better, why they'll just have to blame someone else. There are some things you can do with a gun and there are other things you can't.

"What's it like here now, soldier, five years after you landed and put the first torch to Adolf Hitler's Western wall?

"They have all settled here together, and they are quiet men.

"They'd rather ask you: "What's it like now at home? And, my folks - are they well and happy?

"For they came here to stay, silent citizens of a silent American city on foreign soil. They rest with 9,523 other soldiers in the U.S. military cemetery overlooking Omaha Beach."

These words came from the pen of reporter, columnist and Pulitzer Prize winner Hal Boyle in a piece he wrote for The Associated Press in 1949.

Time has softened the horrors of this epic human sacrifice, which American military forces made to end Hitler's heinous regime in World War II.

Sadly, this would not end our nation's battles with enemies that threaten the world's freedom and peace.

Korea, Vietnam, Iraq, Afghanistan and other conflicts are poignant reminders of the valor of this country's military men and women. Scores have come home from war to rest in cemeteries across America. Scores didn't make it home and are buried in foreign soil.

On this day, Memorial Day, May 26, 2014, we salute all who have served our country - those who have died for us in wars, those who returned to their homeland to live out their lives and those who walk among us yet today.

With hands over our hearts, we thank all the men and women who have put on a uniform to defend all that Americans hold dear.

Editorial: America’s silent citizens, we salute you
Editorial: Memorial Day calls for deep gratitude
Editorial: Today be thankful for our freedoms
Memorial plaque project coming together
100 years ago, US fought its deadliest battle in France