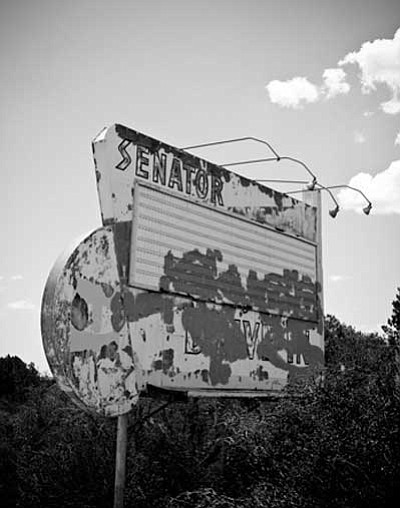 Tom Check grew up in Prescott in the late Nineties. His memories are very different from those of Melanie and Ethan who grew up here more than 30 years before Tom did. He paints a picture of growing up in that is more isolated and disconnected.

Does Tom speak for his generation here or was his experience relatively unique? What do you think?

Tom, were you born in Prescott? How long have you lived here?

I was born and raised in Prescott. At age 13 I moved to Chino Valley until 17. I've been bouncing between Chino, Prescott, Jerome, and my truck ever since. Seven months is about the longest stretch I've ever not been in Northern Arizona.

What part of town did you grow up in?

I grew up on Campbell Street right near the creek, back before Whipple Street was there. Hilariously enough, I don't even know what the 'name' of this neighborhood is. We've always referred to it as the Ghetto.

What major events do you remember happening in Prescott when you were a teen?

Major happenings in Prescott when I was a teen? I don't honestly remember any standout events or anything during that time. Like most teens I was pretty drawn into myself and my group of friends. We were not interested in community events unless it gave us an excuse to hang out with each other.

What did you do for fun when you were a teen?

For fun as a teen my life was centered on computers, and then cars. We would build computers, network them together, and kill each other virtually every weekend. Once we could drive, fun was mostly racing one another all over the state.

Do you have a favorite memory of growing up in Prescott?

The fireworks were always, and continue to be, a highlight in the year. It was excuse to run around with friends without much parent supervision, eating watermelon, and watching the night light up over the high-school and then eventually Pioneer Park. Fishing at all the local lakes with Dad was always fun as well.

Do you remember how you felt as a teenager?

As a teenager the predominant feelings were boredom and isolation. I had some huge anger issues due to my parents divorcing, and some big fear about not being 'good enough' for most anything. I wasn't cool enough to be popular, and so faced constant low-grade scorn by those who were. I also never really had a direction, so a feeling of being lost was prevalent as well.

How do you think youth were seen in Prescott when you were growing up?

My recollection was that most of us youths were viewed as energetic mongrels. Adults were generally suspicious of what we were getting up to, but not to a large enough degree for them to worry or intervene in our 'affairs'. This was both good and bad. We got plenty of freedom to define who we were and learn lessons, but at the same time it was very easy to indulge in negative behaviors and build bad patterns (e.g. drinking, drug use, overt risk-taking) without anybody coming down on us.

Was there an adult with whom you connected? Someone who made a difference for you?

There were no adults that I really felt connected with as a teen. Lots of other kids connected with teachers, or other staff at school, but I never did.

What made you choose your schooling and your career path?

Schooling and career path were determined by my teenage hobbies. Computers always fascinated me, and I had a knack for them. I took additional computer classes in high school until I was kicked out of them for objecting to authority. Higher education was at Yavapai College because it was free (my mom worked there), and I didn't really know what I wanted to do. It all clicked so well that I decided one day that computers would be my job and so I dove in. I started selling them at Best Buy, and then got upgraded to the on-site technician staff. Then came an offer for network administration with a local business that I ended up staying with for a long time.

What made you come back in Prescott once you were free to go?

I didn't really see myself as free to go until I was 24, when I realized that there might be more to the world than Prescott. What made me come back? The woods and the ease of which I can access them.

What are your hopes for or concerns about kids growing up in Prescott today?

My concerns for youth are: A) readily available technology is reducing their attention and their ability to process the non-digital world in a meaningful way. B) they don't get many good role-models, because adults are also falling victim to point A or they just don't know how to communicate effectively. C) Nobody is making them understand how powerful they can be.

My hopes for teens are that they learn to have real conversations, which will hopefully allow them to meet good mentors, who will show them how amazing they are. [Tom is one of those good mentors for the Boys to Men program.]

What do you think is different about growing up in Prescott today?

The biggest difference that I SEE (which is, understandably, a biased viewpoint) is that many kids have access to a larger monetary wealth base. Parents are giving them more THINGS, while at the same time are providing them with less emotion. This leads to a big dissonance where they don't get some of their emotional needs met, and have a minimum of resources to go to in order to reconcile that dissonance.

How do you see today's teenagers contributing to the community?

That's a hard one. I am lucky to get to see some teenagers who are spreading the idea of peer communication and support. I do not know if this is prevalent outside of my bubble though. Anecdotally - I am hearing that kids have a hard time understanding that community exists, and building it is even harder yet for them.