U.S. Vets to have a new home by the end of June 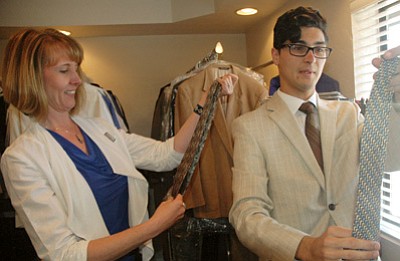 PRESCOTT - The 56 beds that U.S. Vets provides for homeless veterans won't be at the Prescott VA much longer.

The organization plans to move into a new facility by the time they have to vacate their current location on June 30. Originally the organization needed to be out on June 1, but the Prescott VA agreed to an extension that will allow U.S. Vets to remain just a little longer.

The U.S. Department of Veterans Affairs notified U.S. Vets in December that they would have six months to find a new location. The notification, said U.S. Vets program director Annette Olson, came in the middle of the organization's fiscal year, which proved problematic when it came to relocation funding.

"A lot of property owners in the Prescott area have been very generous and very helpful. We do have plans underway and a couple great options to choose from. The big hurdle has been to fund these unforeseen costs. Moving is expensive and moving 56 people is a lot more expensive," Olson said.

Moving to a new location will require the purchase of new lockers, dining room equipment, boxes and more.

Olson has been out in the community seeking financial help to help cover costs not covered by grants. Volunteers are also being sought to help staff move the veterans to the new location.

U.S Vets, a grant and donation-funded non-profit 501c(3) organization, began 20 years ago to provide transitional and permanent housing, as well as employment development for veterans, particularly homeless veterans. The organization currently has 11 sites across the nation. It's had a presence in the Prescott area for the last decade.

"For the 10 years that we've been in Prescott, our transitional housing program has been on the Fort Whipple campus of the VA. We have a dormitory-style model and grant funding to have 56 people in that program," Olson said. "In the program we provide case management, we work on action plans, and we work on the barriers that they have to independent and stable housing, and the barriers they have to employment."

"We have 17 different locations of permanent housing in the community too, but if those are full, then we also help them find other locations," Olson said.

Residents in the transitional housing are allowed to live in the accommodations for up to two years. In Prescott, the 56-bed facility is currently full.

While U.S. Vets works to transition to a new location, their other programs are continuing, such as the organization's career center at 917 E. Gurley St. The center is open to all veterans, not just those that are part of the transitional housing program.

"People can access our resources here if they're a veteran and looking for employment," Olson said. "We have computers so they can search for jobs, we have dress for success classes, we have coaching to get used to interviewing again, and job search techniques, which has changed a lot."

Prescott resident Martin Harris, 25, served five years in the U.S. Army Infantry, which included two tours in Iraq. He left the army in December 2012 with his school benefits and attends aviation courses at Yavapai College. He's expecting to have a private aviator's license next week.

Harris works at U.S. Vets with workforce development coordinator James Elphick on the Homeless Veterans Reintegration Program. Both Harris and Elphick work with vets staying at the Prescott VA in the U.S. Vets facility. That work includes preparing vets for the workforce with clothing, training and more.

"It gets them stable and into their own place. We help them become self-reliant veterans reintegrating back into civilian life," Harris said.

Harris said, after 18 months of civilian life, he's still having a tough time adjusting himself.

"It's a hard transition to make for every vet, regardless of what they've done. It's a huge lifestyle change and it happens in a day. We need programs like this. If not, we're going to have a bunch of veterans that don't know what to do," Harris said.