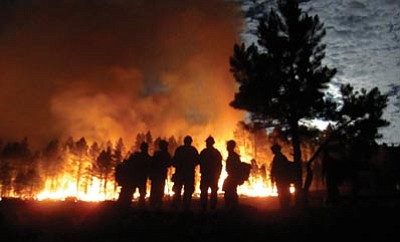 Courtesy photo<br> The Granite Mountain Hotshots assess the Las Conchas wildfire in New Mexico in 2011. The elite crew had the expertise to conduct initial attacks on fires in rough terrain in the dark.

In what officials are terming a "transitional year," the City of Prescott plans to eliminate its six full-time Hotshot crew positions, and add three lead fuels technicians.

The proposed staff changes were a part of this week's Prescott City Council deliberations on the budget for the coming fiscal year, beginning July 1.

The workshop, which lasted about three hours Thursday morning, is the first of two planned city budget meetings. The next workshop will take place on May 29.

The plan that city officials rolled out Thursday includes 11 new staff positions, along with 13 position eliminations.

Among the eliminated jobs are the six full-time Hotshot crew positions previously filled by the Granite Mountain Hotshots. The full-time Hotshots, along with 13 seasonal crew members, died this past June fighting the Yarnell Hill fire.

Since then, the question of whether the city would replace its Hotshot crew has gone unanswered.

City Manager Craig McConnell said after Thursday's meeting that that status has not changed. "There's been no decision made on having a Hotshot crew," he said. "We're looking at fiscal year 2015 - this budget year that we're talking about - as a transitional year, so we're not budgeting (for the Hotshot crew)."

The proposal to eliminate the six positions generated some discussion among council members.

"With the loss of six personnel, are we fully staffed?" Councilman Jim Lamerson asked. "We need to be prepared with our staff, with our personnel, to defend the city."

Deputy City Manager Alison Zelms responded that the city's fire department has highly trained personnel on staff, and that the city participates in a "highly coordinated" area fire-fighting effort, which brings together skill sets and resources from Central Yavapai County and the Prescott National Forest.

McConnell added that the move to add full-time fuels technicians could result in more local fuels-reduction work in the coming year than in previous years. "The goal is going to be to increase the fuels reduction effort in the City of Prescott, which will directly benefit the public safety of our residents," he said.

Of the decision to go with the addition of fuels technicians rather than Hotshot crewmembers this year, McConnell added, "They're apples and oranges. There's a big difference between a Hotshot crew that operates off-site, and a strictly City of Prescott fuels mitigation crew that works throughout the year. It's two different things."

Budget and Finance Director Mark Woodfill said the proposed city budget includes two grants that would help to cover the cost of the seasonal fuels-reduction workers - a $331,000 State Fire Assistance grant ($165,000 of which would be a local match), and a $175,000 (with a $17,500 local match) Hazardous Fuels grant.

Zelms said the schedules of the seasonal workers would fluctuate "depending on the season."

While noting that the full-time workers likely would receive some wildland training, Zelms said they "would not serve in the capacity of a Hotshot."

The city also proposes eliminating one tax and licensing employee - in response to a change in state law that puts the responsibility in the state's hands.

Among the added positions are: a human resources assistant related to compliance with the Affordable Care Act; a maintenance worker in recreation services; a wastewater treatment plant operator; an office assistant in fire administration; and two solid waste maintenance workers.