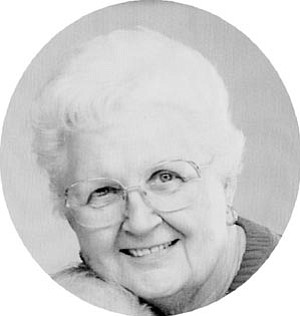 Virginia (Bogart) Boughton of Chino Valley, Ariz., went to be with Our Lord on May 7, 2014. She passed away peacefully with family at her side.

She was preceded in death by her husband, John B. Boughton. They are now together and will be forever.

Virginia, who was 85, was born in Bay City, Mich., on April 13, 1929. While attending high school, she awoke a sleeping classmate, John, who became her lifelong sweetheart and husband of 61 years. They raised a family of three sons, John F., Dale John and Bruce John. Virginia insisted that each son should carry her husband's name.

The family moved from Michigan to Phoenix, Ariz., in 1959. Virginia quickly began setting up a household for her husband and three growing sons. When John retired, they moved to the Prescott area and eventually settled in Chino Valley. Virginia was always ready for a new challenge - the word "can't" was never acceptable to her. She and John were very active in their church and community, willing to go the extra mile to help whenever needed.

She will also be missed by her extended family at St. Luke's Episcopal Church and all who knew her.

The family would like to extend our heartfelt thanks to all of Virginia's friends who were so willing to help her during the closing days of her life and ask that when you think of Virginia add a little smile for a wonderful lady! In lieu of flowers, donations can be made in Virginia's name to either St. Luke's Church or Hospice.