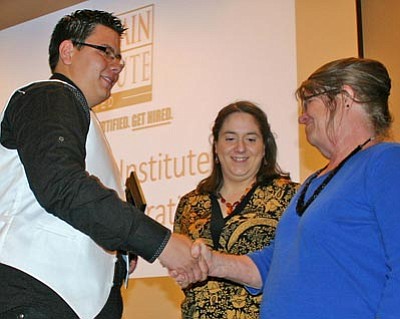 "You have to have a realistic dream, but when you set your mind to it, you will reach it," Carter told the students.

Carter spoke at the institute's first awards ceremony since classes began in 2009; school officials plan to make the ceremony an annual event. The ceremony was held at the Prescott Adult Center.

Seniors from eight high schools in Yavapai County, one home school student and one online student, who both live in the county, completed courses of study in one of eight fields through the Joint Technical Education District. Arizona has 12 other JTED districts.

The number of seniors from high schools in Prescott, Prescott Valley, Chino Valley, Seligman, Ash Fork and Mayer and the two county-based seniors received certificates in the following course programs, including the senior who earned the program Student of the Year, is listed as follows: 13 in Transportation Technologies, Garret Bailey of BMHS; five in Culinary Arts, Neftali Lopez-Arce of BMHS; eight in CNA (Nursing), Josey Greer of CVHS; two in Education Professions, Delia Sotelo of CVHS; three in Medical Professions, Nicholette Poss of CVHS; seven in Pre-Engineering, Miles Mabey of Tri-City Prep; three in Sports Medicine, Alyzandra Perlak of PHS; and six in Welding Technologies, Tykus DeRonde of CVHS.

Seniors who received the scholarships, presented by Sandi Brown, wife of Yavapai County Board of Supervisors Craig Brown (who was out of town on BOS business that night), personal scholarships given by the Browns, were Kylie Newman of Seligman High School, and, from Chino Valley High School, Delia Sotelo, Brynn Livernois and Maddie Zambrano, a satellite JTED student through her school's agriculture program.

A visual program introduced each senior with a current photo and childhood photo of each, their field of study and JTED accomplishments, where they plan to attend college or employment field, and a quote from each senior describing the mentor who most inspired them.

In 2008, Yavapai County voters approved the JTED district to be paid for by property taxes. Classes began in August 2009.

Mountain Institute JTED Prescott-area district office is located at 3003 Centerpointe East Drive, at the Prescott airport industrial park, in Prescott. For more information, call 928-771-0791 or visit their website at www.mijted.net.