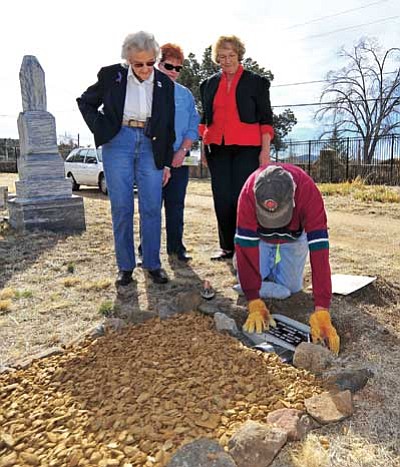 PRESCOTT - Edith Ruffner must have been a pistol in her day.

Just a week before Arizona gained statehood in February 1912, her husband Charles succumbed to long-standing injuries he suffered at his mine near McCabe and left her with three young children to feed.

She immediately set out to earn her own living in a Prescott world dominated by men.

An account collector for the O.K. Meat Market, Ruffner described her situation bluntly in a letter to the editor of the Weekly Journal-Miner on March 26, 1913.

"One year ago I was left penniless with three young babies," she wrote in a letter titled 'Is Willing to Work Man's Hours.' "I had only one idea, and that was to enter the working world and take my place beside those of equal capacities, men and women.

"My friends held their breath. How could a woman earn enough to support such a family (weak little thing). I must have help from the county or give the babies away.

"Little they reckoned with a real mother's feelings."

Ruffner not only refused help from the county, she ran for county office and won, becoming County Recorder in 1914.

Tragically Ruffner soon followed the fate of her husband, dying while in office in October 1917. She was buried here in Citizens Cemetery.

Almost a century later, Yavapai Cemetery Association volunteer Judy Branson was transcribing the names from an old cemetery map and saw the name Edith Ruffner, but found that her grave had no stone.

It wasn't hard to figure out who to contact about the discovery. The Ruffner name has been prominent in these parts since the early mining days. George Ruffner was a Yavapai County sheriff in the late 1800s and the 1920s and 1930s, as well as a funeral home owner. His nephew Budge was a Courier columnist and funeral home owner.

When the Cemetery Association volunteers contacted Budge's widow Elisabeth, a prominent local historian and civic activist in her own right, they found out that Elisabeth had just learned of the name Edith Ruffner last December while going through old boxes of Budge's papers.

Elisabeth had found a 1986 letter to Budge from Edith's daughter, Florence Ruffner Hayes of Oregon, talking about her memories of Prescott and wondering if Budge knew her parents.

Elisabeth figured they had to be related, but she didn't know how and she didn't remember the name at all.

But when she saw all the old newspaper articles that Judy had collected about Charles and Edith, she did know one thing for sure.

"I wish I had known her," Elisabeth said. "When you read that newspaper ad, you know this is my kind of gal."

"She sounds just like my mother," Melissa said of Edith.

The Ruffner family was quick to take advantage of the Yavapai Cemetery Association's new Marker Placement Project at Citizens Cemetery and buy a gravestone for Edith. They placed it on her grave on Statehood Day.

Alongside Edith's basic information is the line "Unique for Her Time." The line was pulled from a 2011 obituary about Edith's daughter Frances, who was 7 when her parents died and ended up being raised by her aunt in East Aurora, N.Y. Unlike her parents, she lived to the ripe age of 101.

An estimated 3,000 pioneers were buried at Citizens Cemetery between 1864 and 1933, but only about 800 markers exist today. The county owns the cemetery and the Yavapai Cemetery Association helps take care of it. The cemetery is on the National Register of Historic Places.

Judy Branson and Gail Luetdke oversee the Marker Placement Project for the YCA. Ken and Linda Cadwallader of Set In Stone Monuments in Dewey design and produce $75 markers for people who want to buy them for the unmarked graves.

"This is our 27th one we've set within the last month," Judy said as Edith's stone was set Feb. 14. "There's so many stories in here."

Shortly thereafter, the family of Frederick Little bought and installed a stone for his 1913 grave that YCA located. Frederick might have known Charles Ruffner, since he also was a miner from McCabe at the same time Charles was in the area.

"I enjoy helping people," she explained. "I enjoy the hunt, and being able to resolve who they are and what they did. You learn so much history about the people, the families, the things they went through.

"They need to be honored by remembering them."