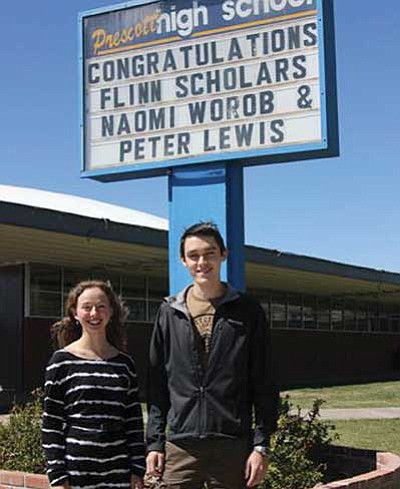 Prescott Unified School District officials are proud to announce that two Prescott High School seniors have been awarded the prestigious Flinn Scholarship. Naomi Worob and Peter Lewis were notified earlier this month that they would be receiving the award.

The two will both receive free tuition, room and board, money for study abroad and mentorship form faculty at their choice of Arizona's three public universities.

This is the second year in a row that two PHS students have won the award. Each year, the Flinn Foundation awards 20 scholarships across the state. The scholarship package is estimated to be worth in excess of $100,000.

The Flinn scholarship is highly competitive, and the process begins in the spring of a student's junior year. The application requires three essays, a lengthy resume and several recommendations. While excellent grades and test scores are important, other factors including a student's character and extra-curricular activities are considered as well.

The Flinn Foundation is a privately endowed, philanthropic grant-making organization that was established in 1965 by Dr. Robert S. and Irene P. Flinn to improve the quality of life in Arizona to benefit future generations. Today, the focus is on keeping the best and brightest of Arizona's students in Arizona.

Coincidentally, Lewis and Worob were this year's Homecoming King and Queen at Prescott High. They have both been very involved in various music programs during their four years in high school.

Worob has not yet decided between the University of Arizona or Arizona State, but will do so in the coming weeks. One of her goals in college is to develop a model for a school that taps into the art of questioning and to understand how the developing brain reacts to creativity and innovation.

Lewis plans to major in engineering and Chinese, and has chosen to attend Arizona State University with his scholarship. In addition to his love of music, Lewis' interests include languages, science and math as well as travel.

AP World History teacher Shelley Bunch serves as the unofficial "mother of the Flinns" at PHS. She has taught at the school for 27 years and mentored many of the 18 Flinn scholars that have graduated from PHS.