'Don't Dress For Dinner' a comedy of deception 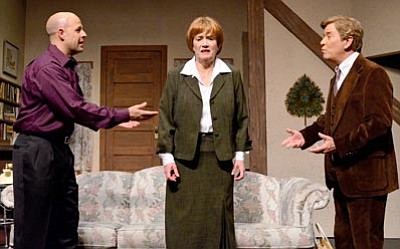 Karen Despain/The Daily Courier<br>Bernard (Alastair Macdonald), left, puts his best friend Robert (John Bryan) and Suzette the cook (Linda Miller) squarely in the middle of his plot to deceive in “Don’t Dress for Dinner,” now playing on the main stage of Prescott Center for the Arts.

Picture a plate-spinning performer twirling multiple plates on poles without letting them fall off, and you will get a vision of the head-twirling sequence of events in Prescott Center for the Arts' production of "Don't Dress for Dinner," which opens on the main stage tonight.

That was the description that actor John Bryan envisioned for the adult comedy that begins with the entry of Bernard (Alastaire Macdonald) who has cooked up a cockamamie scheme that he coerces Bryan's character, Robert, his best friend, into being a part of.

The setting for the two-act play is a French farmhouse, about a two-hour drive from Paris. The characters are Brits and also include Bernard's wife, Jacqueline (Angela Bryan), Bernard's mistress, Suzanne (Jean Maissen), Suzette, the cook (Linda Miller), and Suzette's husband, George.

When the stage lights go on, Bernard is feverishly trying to ship Jacqueline off to her mother's, because he has a little tryst with Suzanne set up for the weekend. The phone rings, Jacqueline answers, and it's a caterer calling to confirm Bon Appetite's weekend service. Bernard concocts an explanation at Jacqueline's query. Then, Robert calls, and even though Jacqueline had already smelled a rat, when she finds out he's coming to town to spend the weekend with Bernard, her mother suddenly has the flu and she cancels her trip.

It comes as a bit of a surprise that Jacqueline's fabrication of her mother's illness is because her lover is Robert, whose visit is at the behest of Bernard, who intends to make him his fall guy should Jacqueline happen to return unannounced and catch him in an act of infidelity.

Things get really crazy from the moment Suzette the cook walks in - and the hilarity never stops.

A farce, play director Randy Faulkner said, is different than comedy in that "it's supposed to be presented as a real thing happening." The audience thinks, "Oh, my God, I can't believe this is happening."

Angela Bryan says her Jacqueline is a "wannabe socialite" and "control freak" who commits the "ultimate travesty" by having an affair with her husband's best friend.

Robert "is basically a good man who gets involved with his best friend's wife, so that doesn't make him very good," John Bryan said of his character.

"Don't Dress for Dinner" is a "comedy of misconception, deception - what you would call silliness in what they are trying to hide" from each other and "not being very successful at it most of the time."

All of the cast has perfected British accents, and Macdonald's is built in. A native of Zimbabwe, he is a fourth-generation African. He arrived in Prescott just two months ago, and landed a part in "Don't Dress for Dinner," his first role on stage in 15 years.

Bernard, he said, is "a sneaky philanderer, the quintessential philanderer and complete mouse of a man to his wife and the alpha man to his girlfriend." And, "his wife knows the truth."

"My biggest hope," Macdonald said, is that the play "is as much of an indulgence in fun for the audience as it has been for the participants."

One of the multitude of hilarious lines in "Don't Dress" comes from Bernard when he finds out that Jacqueline is involved extra-maritally and even though he doesn't know it's Robert, he threatens to "pickle" a certain part of the culprit's anatomy and frame it.

Robert's cringe is a classic.

Miller, a veteran of the PCA stage, says Suzette "is a cook just coming to do a regular booking and gets mistaken for somebody else coming to the same house."

Farce, she said, "looks so easy but it's so difficult, because of convoluted language that goes fast and is wordy. The plots are convoluted."

"I love doing farce," Faulkner said. "It's one of the best things you can do in life. It makes people laugh" in the face of life's troubles. "Farce is very sophisticated humor. It's us watching other people in predicaments and situations we may have been in. It's also a moral thing. It shows how screwed you can make life by being dishonest."

PCA Executive Director Jon Meyer said of this production, "It seems a lot of the shows we've been offering for a while have been rather dramatic, so it's nice to offer a frothy, light and very delicious comedic farce, and there's no director better in Prescott than Randy.

"The cast is stellar. We have both veterans and actors making their debuts on the PCA stage. Don't Dress is sheer entertainment, just a great time at the theater."

One of the novice actors is Chris Ramm, who plays Suzette's husband George. Ramm is 6' 6" tall, and when he comes through the door, a lot of cringing goes on.

"Don't Dress for Dinner" plays at 7:30 p.m. tonight, Friday and Saturday and also Thursday, Friday and Saturday of next week. Matinees are at 2 p.m. this Sunday and on Sunday, March 29. Tickets are $15 to $19 for adults and $11 to $14 for youth. Parents should note that the play is an adult comedy.