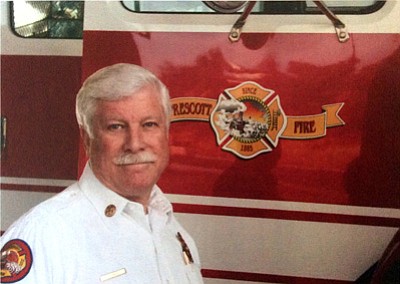 Ted graduated from Prescott High School 1964. He graduated from A.S.U. with a Bachelors degree in education, and then later went on to graduate from Yavapai Community College with an A.A.S. in Fire Science. Ted had 28 years of loyal and dedicated service to the Prescott Fire Department. On top of serving as a firefighter and a first responder, Ted also was paramount in helping the City of Prescott, both firefighters and citizens, realize the importance of fire prevention as one of the most pure forms of public safety. Ted had an expert knowledge in hazardous materials and its code, allowing him to interpret the code and relate it to local businesses. He also was passionate about Prescott starting the first Wildland-Urban Interface program in the state of Arizona bringing and interpreting the Wildland-Urban Interface code. He retired after several years of serving as Fire Marshal.

Ted was involved in the ministry of Young Life from a very early age until his death. He was instrumental in bringing Young Life to the Prescott area in the early 1990s where he has watched it grow to the awesome ministry that it continues to be today. He loved hunting, working with wood, building things with his hands, but most of all he loved his Lord, his family, caring for people, and serving the public.

Ted is survived by his wife of 29 years Sandy Galde; his children, Jason Galde and Ben Galde both of Carlsbad, Calif. and Amanda Trent (Joseph) of Glendale, Ariz. Ted had three grandchildren, Cooper Galde of Australia, Joseph and Addison Trent of Glendale, Ariz. He is also survived by his siblings Dan Galde of Skull Valley and Susan Reiman of Lincoln City, Ore.; and many nephews and nieces. He is also survived by his first wife Karin Brock of Carlsbad, Calif. Ted was met in heaven by his parents Lloyd and Dorothy Galde and his oldest brother Peter Galde.