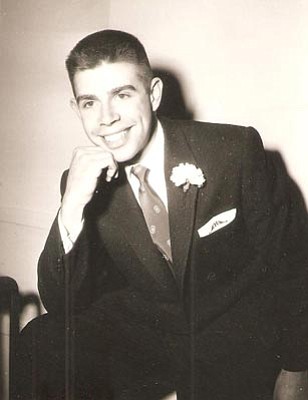 Donald Gene Henning, 84, passed from this life into the loving arms of our Lord on March 12, 2014, in Prescott, Ariz., after a courageous battle fighting Parkinson's disease.

He was born in Fairbury, Ill., on Nov. 19, 1929, to Walter and Mona Henning. Donald was the youngest of four children and was raised in Fairbury. He farmed in Cropsey, Ill. He served in the Army from 1951 to 1953. Donald married Nadine O. Hutchinson in 1955 in Long Beach, Calif. He then moved back to Fairbury where he raised three children and worked at Honneggers building chicken coops. He moved to Prescott, Ariz., in 1975, and fell in love with the people and area. Don bought the Prescott Motor Inn and ran the motel for 12 years. He enjoyed hiking with his buddies down the Grand Canyon and areas of Arizona, and was an avid bicycle rider. He biked the Million Dollar Highway in Colorado and also rode from the Grand Canyon to Nogales, Mexico. He is known for never wearing long pants, as he loved his shorts. He will be missed by his family and all who knew him.

Donald is survived by his loving wife Nadine; and his children, Jeff (Elizabeth) Henning, Lori (David) Rentschler, and Judy Meeker. He is also survived by five grandchildren, his brother, Hugh Henning, sisters Marion Youngblood and Dorothy Scott, and several nieces and nephews.

A memorial service will be held at Camp Pinerock in the M.L. Mann Tabernacle on Saturday March 15, 2014, at 1 p.m. in the afternoon. In lieu of flowers, please make donations to the American Parkinson Disease Association.