She left and came back, too 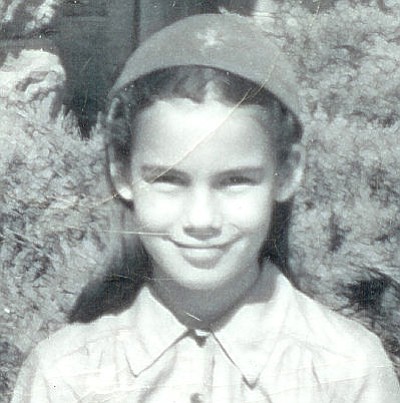 This month's interview features Melanie Jacobson, who grew up in Prescott during the same decades that Ethan Wolfinger did. Her experience was much the same. She remembers the same safe, integrated community that had lots of activities and opportunities for teens. At the end of the interview, Melanie makes a commitment and a plea. What do you think about her ideas?

Were you born in Prescott? How long have you lived here? I was born in Tucson. My parents moved here in 1957 after my dad graduated from the University of Arizona law school and he got his first lawyer job in Prescott. I lived here until I graduated Prescott High School and went to the UofA in 1971, of course believing I'd never return to "that old cow town" (only about 10,000 people lived in Prescott then). I moved to Eugene, Ore., in 1980 to attend law school and lived in Oregon for another 12 years. I ended up in Santa Barbara for 10 years and moved back to Prescott in 2003.

What made you come back in Prescott? Why? Family. The aftermath of Sept. 11, 2001, for me was a wake-up call that had me questioning what was most important to me. The answer was the people who truly love me - my parents, siblings and their kids - all living in Prescott. So despite the culture shock I knew was coming leaving a fairly moderate/liberal culture for the Old Wild West, along with taking a major pay cut, being able to drive across town to see my family was the reason I came back.

Describe what you do in Prescott now for career, community involvement and hobbies. Not liking the practice of law at all, I had jobs in marketing, media production and business administration. In 1997, I put my experience all together in a 10-year career in contract/corporate administration and telecommuted with my Santa Barbara employer from 2003 - 2005. I then did the same job for a local building technology company through 2009. I then stepped in as the executive director for United Way of Yavapai County in early 2011 to restore fiscal health and fully transition the agency to a new business model. My mission completed, I left United Way at the end of 2013 so a professional nonprofit executive can lead United Way to its next level of excellence. I will return to corporate administration employment in Prescott and continue my efforts on the behalf of area nonprofits.

What part of town did you grow up in? I grew up in the Country Club/Highland area, south of downtown. My mother still lives in the house I, my brother and three sisters grew up in.

What major events do you remember happening in Prescott when you were a teen? Fourth of July was definitely the biggest event all year. The whole town watched the parade and then stayed on what we called the plaza (now it seems to be the "Courthouse Square"). The fireworks were held at Watson Lake in the area where the park and gazebo are now. Late afternoon, everyone drove up into that little canyon, parked and had fried chicken dinners. The other big event was the Courthouse Christmas lighting. The trees weren't lit up then. The Courthouse was covered in red, blue, green and gold lighting, which made it look like a big Christmas present. The high school choir sang carols on the north steps and some dignitary would tell the Christmas story.

What did you do for fun when you were a teen? There wasn't much going on outside of school and sports during the school year. I was very involved with extracurricular activities such as the Drama Club, choir, and I played fall basketball for the Catholic Youth Organization; we played other church teams around the county. In the summers there was a community swimming pool ($.50 to get in, a coke and candy bar) and a roller skating rink (Friday nights in the fall) on the property that is now the YMCA. The rink was in the building that's the YMCA's gymnastics facility. In the summer there were teen dances every Saturday night at the Armory or the old junior high where the Yavapai County offices are across from Washington Traditional School. The big hangout places were the Dairy Queen (now Allen's Flowers) on East Gurley and across the street the Pizza Inn (the A-Frame). But for those teens who weren't interested in these activities there was pretty much nothing available for "fun."

Do you have a favorite memory of growing up in Prescott? At this time in my life, my childhood of memories growing up in Prescott make me feel how lucky I am to have grown up in a safe, small town where everyone pretty much knew who you were and who you belonged to. No one locked their doors or their cars. Kids walked everywhere (if they didn't have a bike) - school, sports, movies, swimming pool. Only four TV channels so we didn't spend much time on our rear ends. There were no "play dates" - neighborhood kids just got together and played. If a teenager got stopped by a local cop or deputy, he called your parents and sent you home (or personally delivered you) knowing whatever you got at home would be the end of it. Sure there were teens who had more material prosperity than others, but we didn't have designer-anything, so we were pretty much the same as everyone else. There was no easy access to pot, prescription drugs, meth, or heroin and we were too scared of getting pregnant to have sex. Gun violence was not a part of our lives - they were for hunting and target practice if we were lucky to take an NRA class or our dads took us out. Our little town enjoyed a first rate public school system that provided an excellent education to thousands of Prescott children because our teachers we're highly valued and paid accordingly. We enjoyed art, music, sports, P.E., vocational classes and drama free because classes were offered by the schools or Parks & Recreation. No "cult of celebrity". No local, county, state, government political divisions based on rigid ideology that refuse to compromise for the better good. Most especially, we didn't have the constant 24/7 bombardment of information that today tells teens who they have to be in order to be acceptable regardless of the fact they don't have the basic resources to achieve them.

How do you think youth were seen in Prescott when you were growing up? In my teen years of the late 1960s/early 1970s, I think my elders regarded us as basically good kids waiting to graduate, go to college or get a job, get married, and have kids of our own, even though they were concerned about the effects of the '60s revolution of sex, drugs and rock and roll. Yes, these forces reached Prescott, but their influence didn't disrupt the lives of Prescott teens as those same influences do today. Despite these influences, growing up in this safe, small town environment gave teens of my time the basic foundation for a successful transition to adulthood - able to complete the education we wanted, able to earn a decent living whether blue- or white-collar.

What do you think is different about growing up in Prescott today? What are your hopes for or concerns about kids growing up in Prescott today? Based on what I've shared above, I simply can't imagine what it's like to be a teen growing up in Prescott today. There's so much pressure, from such an early age, for our teens to conform to the popular culture's expectation for success. And what tools have we given them to succeed? Yavapai County has the highest poverty rate in Arizona - which has the second highest poverty rate in the nation (Mississippi is the highest). Prescott's focus on tourism and retired seniors has created little economic opportunity for parents to rise above minimum wage + tips jobs. So many kids grow up without the basic resources of food and healthcare. So many kids grow up without a dad to help mom with financial security and parenting. Teens compete with adults and seniors for minimum wage retail and fast-food jobs - so who gets left out? Extracurricular activities - sports, music, dance, drama, art - are available only to those families who can pay for them, so hundreds of kids are left out. Why are we surprised when we have a significant drop-out rate and rising juvenile delinquency?

My hopes for kids growing up in Prescott today is that we adults wake up and remember how lucky we were to grow up in an America that invested - through taxes - in its children so that they had the best opportunity to grow up to become a successful adult able to contribute his or her best to our society. The "American Dream" is all but out of reach to any teen who doesn't have the financial and educational support needed to succeed. I'm committed to help move the dial towards that success.