Prescott Opry brings talent from near and far 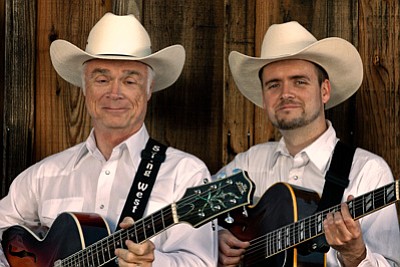 Courtesy photos<br> Father-and-son act Dave and Matthew Decker from California, along with young musician Alli Prescott, below, will highlight the Prescott Opry show, Thursday at the Elks Theater and Performing Arts Center.

Long-time Prescott musician Lloyd Self does a lot with a little.

Self is part of the lineup that will entertain Thursday, March 13, when the Prescott Opry takes the stage at the Elks Theatre and Performing Arts Center at 7 p.m. Tickets are $12 to $17 and are available at the box office by calling 777-1370 or going online to www.prescottelkstheater.com.

Self, who likes to explain his music to the audience before he performs, will pick up his guitar to play "Malaguena Salerosa" and a Glen Miller hit, "In the Mood," among other melodies.

Now in his 70s, Self first began to learn the guitar when he was 8 years old. And, as he says, he likes the audience to "know what's going on" when he plays a song rather than his listeners "just seeing his name on a page" of the playbill.

Another set will feature Dave and Matthew Dekker from Southern California who plan a half dozen songs Western Swing style, Dave said.

"I enjoy playing this because, by and large, it's lively" - with elements of jazz and improvisation, he said. "It's fun music people really seem to like it and dance to it. It's fun to look out and see people enjoying what you're doing."

Dave is a fan of Bob Wills. "Anybody who plays Western Swing better like Bob Wills," Dave said. "He invented it."

And, he is also an aficionado of vintage country music, rather then the newer Nashville versions of the genre, and Hank Williams, Marty Robbins and George Jones are among his heroes.

Matthew is Dave's son and he got him started on the guitar when he was 10 years old.

"He surpassed his 'old man' a long time ago. I wish I could say I taught him everything he knows," Dave said.

Matthew, his father said, likes jazz and rock and roll and that he "takes being teased about wearing a cowboy hat in stride."

The evening's entertainment will also include Jeff Ryan and Patricia Fiegle, a duo that plays throughout Arizona, featured youth artist Alli Prescott and resident bluegrass ensemble, the Brush Arbor Revival.

Alli, now 15, began playing at age 10, learning to play by ear a guitar that her grandparents gave her. She also plays piano and a variety of percussion instruments.