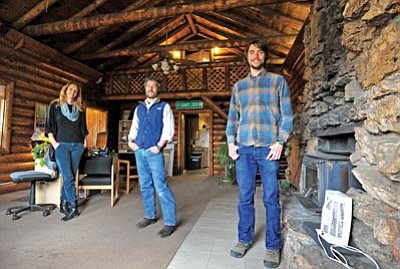 PRESCOTT, Arizona - Through the years, Michael Byrd has often looked wistfully at the rustic log cabin that sits along Highway 89 near the woods that border Granite Creek in east Prescott.

"I always thought, 'Someday, wouldn't it be great?'" Byrd said of the possibility of securing the building as the headquarters for the Prescott Creeks organization, for which he serves as executive director.

That dream recently came true for Prescott Creeks, the group that advocates for the area watershed and creeks. Since a late-December move, the organization has been settling into the Highway 89/Rosser Street building.

And to hear Byrd and Prescott Creeks' Outreach and Communications Di-rector Ann-Marie Benz tell it, the payoff has been immense.

Even though the 1959 building still needs some TLC, Byrd and Benz say its proximity to the creek and Watson Woods, as well as the ample outdoor space, more than make up for the adjustment of moving into the old residential building.

"It's a great fit for us," Byrd said Thursday as he stood in the loft that houses his new office. "I can literally walk out the backdoor and be in the (Watson Woods) project."

For years, Prescott Creeks operated from a more urban setting - first on Grove Avenue, and later on Gurley.

While Benz and Byrd say both locations had their pluses, they were relatively removed from the organization's signature project: The 126-acre Watson Woods Riparian Preserve.

Since 1995, when Prescott Creeks took on the management of the city-owned land, the group has been working to restore the woods.

Byrd points out that the stand of cottonwood and willow trees is all that remains of what was once a 1,000-acre forest that ran from the Granite Dells to what is now downtown Prescott.

With industrial uses on several sides, Watson Woods at one time faced a similar fate, Byrd and Benz say, noting that the property was once used as a community dumping ground of sorts.

Even though Prescott Creeks has branched out into other endeavors, such as watershed protection and riparian restoration along other waterways, Byrd said, "Watson Woods is what got me started."

And being continuously onsite has been an eye-opener for the organization. "We thought we knew Watson Woods," Benz said, "but we're really seeing now how people use it."

Along with its stellar location, the old log building offers some interior amenities as well. A floor-to-ceiling volcanic-rock fireplace serves as a focal point in the downstairs area, and a loft overlooks the great room area.

Byrd has been researching the history of the building, and he said records indicate it was built in about 1959 as a location for the Air-Lock Log Company.

After the company left the site, Benz says the building served for years as a residential rental. The previous owner recently died, Byrd said, and Prescott Creeks is renting the space from a family trust through a management company.

Although the current lease is for one year, Benz said the organization hopes for a longer-term arrangement.

Meanwhile, the meeting-room space and large outdoor area will allow Prescott Creeks to conduct a variety of community events. Among the upcoming events is an open house this afternoon, Saturday, March 8, from 2 to 5 p.m. Benz and Byrd say the public is welcome to stop by.

Visitors can access the building by turning east at the Highway 89/Rosser Street traffic signal. Parking is available at the building, and Benz said a nearby Watson Woods trailhead also can hold about 30 vehicles.