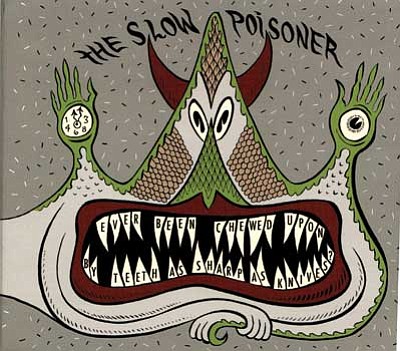 Album: "Ever Been Chewed Upon By Teeth As Sharp As Knives?"

The Slow Poisoner's new album, as do all of his musical offerings, arrives in the right place at exactly the right time.

The Poisoner is the one-man video and audio of San Francisco's Andrew Goldfarb. He takes care of the audio, through his records. The video is up to your mind as you listen.

His newest album is a brilliant tapestry that infects the listener with a quick serum for whatever ails. (Odd; a quick serum from a slow poisoner?) His indie freakness is gloriously spilled everywhere over, what else, but 13 songs. "Ever Been ..." follows up 2009's refreshingly original "Magic Casket," which is still hanging over our cosmos in full reptilian bloom.

The songs are great. The writing is ingeniously inspired. The arrangements cover all new ground. The presentation is honestly in your face.

Underlining the whole album is Goldfarb's throaty vocal delivery, which crawls out of a country and western horror show in a freak folk theater of one-man symphonic streams and weird righteousness.

The gypsy tempo will get you. The storytelling then "lays on the gas."

"The Panther Cries at Midnight"

A terrific arrangement with a stingy bass and rapturous guitar.

Most irresistible is the wall-to-wall guitar, which plugs into a Mod amp of The Who at their most 1965-ish. Bring in the swampy organ and you have a music sheet that would make Brian Wilson squint and ponder. You don't even notice that the drum has been slogging out a one-line bum-bum-bum the entire way.

As powerfully as his vocals lend to all songs, Goldfarb's instrumentals equally get you foraging. (Check out "Spastic Maggot" on "Magic Casket".) "Alchemical Gas," with a tribal-kissed percussion pulsating underneath the journey's every layer, may be the single most beautiful piece of music Slow has ever Poisoned.

Goldfarb has played Prescott spots in the past, if you've been lucky to catch him. His current tour takes him only as close as Phoenix (Aug. 20) this time, though.

Wherever he plays, his Dick Dale guitar is so loud and vibrational that 'vibrational' is now officially a word. He puts the Jack White in Neil Young, give or take spooky background vocals and flat-out kick-ass guitar grooves smoother than Velvet. He goes places Devendra Banhart wouldn't find even with the most revealing kaleidoscope, but in reality he's the artful grandson of The Hombres.

100 percent of those surveyed agree that The Slow Poisoner is best to listen to with black lights, no windows, angry walls, a loving chair, a sweaty stranger, and a dimension or two.

You will cry at midnight.

Rating: 5/5ths of an incense stick