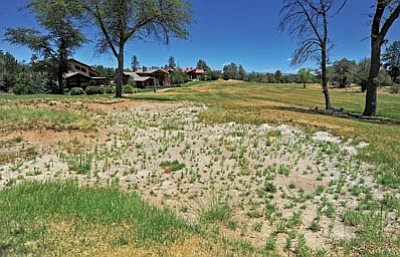 The Hassayampa Golf Club course today, above, is withered from lack of care, but two prospective buyers would like to restore it to its former glory, as seen in the 2006 photo below.

Nearly two years after receiving Chapter 11 bankruptcy protection, the private Hassayampa Golf Club in Prescott may soon be sold to one of two prospective buyers so that its picturesque 18-hole course can reopen.

Hoamco, the Hassayampa gated community's homeowners' association, announced in a letter released Tuesday that an affiliate of Scottsdale-based Desert Troon, the course's owner, has signed contracts with those confidential potential buyers, including "one with significant golf course management experience."

Attorney David Shein of Scottsdale, legal counsel for Desert Troon, said, "The first of the two buyers to actually 'go hard' (commit to the deal), will essentially win."

At this point, there is no timetable as to when the course might reopen, as both potential buyers are still deciding whether to close the deal. If both opt out, Shein said, Desert Troon would reassess the situation.

A deal could be consummated "within the next month," Hoamco said in its letter. The letter added that the new ownership may consider reopening the course as a private-public enterprise, but it's unclear what will be done with the Hassayampa's clubhouse, dining hall and other facilities.

Former Hassayampa Golf Club board member Steve Sischka said he's thrilled that golf has a strong chance of returning to the subdivision.

"This is absolutely fabulous for the community," he said. "If in fact they have a plan, and a plan that is going to be acceptable from a financial standpoint to golfers, this is the best thing that's happened to this community in a long time."

Desert Troon shut down the Hassayampa Golf Club's course in 2012 after the latter filed for bankruptcy late that March.

Larry Stanek was the Hassayampa Golf Club board president from 2010-12, and still lives in the Hassayampa subdivision. "We tried to manage it, but then there was this other little thing called the (Great) Recession that hit in 2008," Stanek said.

Desert Troon, which is the Hassayampa community and its course's original developer, regained ownership of the course in November 2012 when talks apparently broke down to sell it to Arnold Palmer Golf Management of Dallas.

Last week Sischka said the club could not solve its debt problem by opening the course to the public because the course is in a gated community where homeowners pay the HOA for privacy.

Sischka added that a club membership cost $40,000 to $50,000 per person, but it was supposedly refundable if a member chose to resign because the logic was that other incoming memberships would compensate for the refunds.

However, Terry Flynn, who was a Hassayampa Golf Club member for about 10 years and still lives in the community, said the club was starting to lean in the direction of operating a partly public course.

"It could've been a semi-private, where it could've had outside play, sure," Flynn said. "You can restrict those things, like a certain number of tee times, and restrict it to certain timeframes to make members feel like they've got something there in a club. I don't think it would've been an issue with any of the homeowners in here."

Chuck Fulton, a Hassayampa resident since 2002 who was a long-time golfer there with his wife, Judy, said last week that the golf club was one of the main reasons he had his home built there. Chuck once served on Hassayampa's HOA board of directors (although he currently holds a committee position) and Judy once sat on the Golf Club's board of directors.

But with the economy and the housing market continuing to improve in 2014, Chuck holds out hope that the Hassayampa course will return. He said reestablishing a golf course at Hassayampa would enhance the values of the homes there.

"I'm an optimist, so I think it possibly will," he added. "But in what capacity, I don't know - whether it would be a public, a semi-private, a private club or under what auspices."