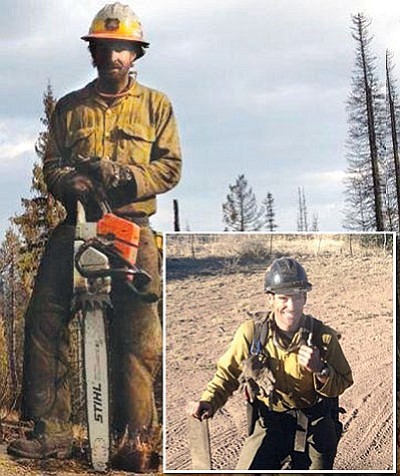 Saw partners Scott Norris, left, and Joe Thurston, inset, “were very effective together and loved working together,” as Granite Mountain Hotshots, said Scott’s mom, Karen Norris. Below, Scott sent an iPhone picture to his parents from the Doce Fire in 2013.<br> Courtesy Photos

Two days from now, families, the community, the state and the country will commemorate the one-year anniversary of the deaths of 19 of Prescott Fire Department's 20 Granite Mountain Hotshots. The men perished fighting the unpredictable and devastating Yarnell Hill Fire on June 30, 2013. Today the Tribune honors the memory of all 19, focusing on the four Hotshots from Prescott Valley.

Scott Norris, 28, the son of Jim and Karen Norris, was a true hometown boy and a 2003 graduate of Bradshaw Mountain High School. He received his firefighter certification from Yavapai College and went on to work for the Payson Hotshots before joining the Granite Mountain Hotshots, where he was a crewman for about five years.

"Scott spent all of his life in this community," his mother, Karen Norris, said. "Although he traveled quite a bit (including trips to Central America, Thailand, Cambodia) he co-owned a home in Prescott Valley just a few blocks from us. He loved this community and was a good son, stable and responsible. He was always stopping in to have a meal or just hang with us."

Karen said Scott was a funny guy and great imitator who enjoyed entertaining folks, especially by recreating movie scenes, and those memories make her smile.

"He had a knack for remembering exact dialogue and could capture character, facial expressions and accents," she said.

His mother said Scott was aware of the danger and risks of wildland firefighting, and was looking forward to eventually becoming a structure firefighter.

"I'm sure he didn't expect to die that day, but he always knew it was a possibility," she said.

Karen also said Scott often texted his parents about his location and situation.

Joe Thurston, 32, a graduate of Cedar City High in Cedar City, Utah, was Scott's saw partner on the Granite Mountain team, and a firefighter and EMT since 2008.

Joe's widow, Marsena Thurston, responded this week: "We had a special connection and from our first date at age 16 I knew we were meant to be together."

The high school sweethearts were married for 11 years.

"Joe was a wonderful soul with a smile that could light up a room and make even the worst day instantly better," Marsena wrote in an email to the Tribune. "He lived to love his family and was a devoted husband and father. Whenever he wasn't working he was with us and he enjoyed playing with the kids and taking us on family outings."

She also said Joe was a talented drummer and a member of several bands through the years.

"We miss him everyday and nothing will change that," Marsena said. "We are finding peace and have started to find joy again. I know the best way to honor him is to enjoy life and raise my boys as we had always planned to do. We keep his love in our hearts and I know we have a special angel watching and protecting us. I'm thankful for all the love we shared and for our two beautiful children."

Last year she wrote that Joe "always was rallying the group to the next adventure."

Captain Jesse Steed, 36, born in Cottonwood, also left behind a wife and two children. But as his widow, Desiree, noted last July, "he was a big kid himself," and "often called a teddy bear and gentle giant."

Jesse served as a United States Marine from 1996 to 2000, and joined the Forest Service in 2001 because "it was the closest thing to military camaraderie that he could find in the civilian world."

He was a Prescott Hotshot, and worked Helitack and engine crews until becoming a Granite Mountain Hotshot in 2009 with "the Brotherhood."

He also loved hiking and dirt biking - the latter especially in the sand dunes with family and friends.

Desiree described her beloved husband as the Hotshot's comedian, who loved to make people laugh.

Anthony Rose, 23, known as "Baby G" among the Granite Mountain Hotshots from the time he joined in the spring of 2012, was looking forward with fiancée, Tiffany, to the birth of their daughter in October of 2013.

Anthony grew up in Illinois, but came to Arizona as a 16-year-old to live with an uncle in Crown King. He volunteered with the Crown King Fire Department shortly afterward, and by age 18, was hired on. Fighting the Lane Two fire and helping to save the town in 2008 sparked a desire to become a wildland firefighter, Tiffany said.

"He could not believe how hard they worked and how dedicated and compassionate all the Hotshot guys were," she wrote in 2013.

Soon after relocating to Prescott Valley in January, 2013, they learned they were expecting.