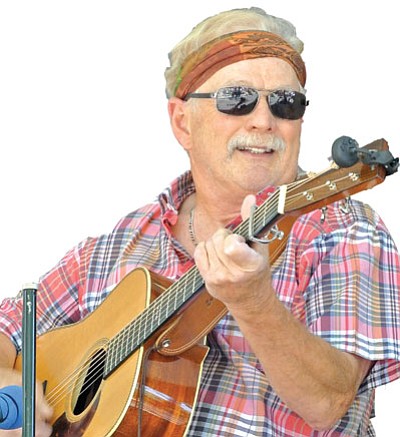 Matt Hinshaw/The Daily Courier<br> Lem Johnson, a member of The Thumb Brutes of Prescott, performs with his band Saturday afternoon during the 33rd Annual Prescott Bluregrass Festival at the courthouse plaza in downtown Prescott. The festival continues today until 3 p.m.

Originally Published: June 22, 2014 6 a.m.
Tweet
PRESCOTT - Visitors to downtown Prescott might have noticed their feet tapping once or twice thanks to the 33rd Annual Prescott Bluegrass Festival, which brought its fiddling beats to courthouse plaza yesterday and continues today.The free event, sponsored by the Prescott Chamber of Commerce, kicks off today at 10:30 a.m. with opening ceremonies, followed by an 11 a.m. performance by Mars Hillbillies, a noon performance by Marty Warburton and Home Girls, a 1 p.m. performance by the Sonoran Dogs, a 2 p.m. Bost Family Traditions performance, and a raffle prize drawing at 3 p.m.While Prescott Chamber of Commerce Special Events planner Scott Currey said raising money gets more and more difficult, the event continues to be a popular one among fans of bluegrass music."Somehow God blesses us every year and we get it done," Currey said. "The festival began as a fiddle contest 33 years ago in the gazebo at the courthouse."While the musical festival has gone through a number of incarnations over the last 33 years, it continues to draw a crowd."The bands seem to really love it here, because this is what bluegrass is kind of all about - the home town. It's not in a stadium and it's not out in a parking lot. This is probably the most beautiful city in Arizona to have a bluegrass festival," Currey said.Linda and Judy Trupp traveled to Prescott from Mesa to spend the weekend at the Bluegrass Festival."We moved out here to Arizona about 13 years ago from Saint Louis. We fell in love with bluegrass in Saint Louis," said Linda Trupp.The two saw an advertisement for the festival a decade ago while visiting Prescott. They've come for the free entertainment almost every year since."Last year we had to skip because of the Doce Fire, but we've been coming up here just about every year," she said."We enjoy being here and listening to the music," Judy Trupp said. "We love all the bands."Prescott resident Dave Koch, a stand-up bass player with the five-member Thumb Brutes band, said the 2014 festival is the first year the band has played at the popular local festival. Koch described the band as "traditional to progressive" bluegrass music."It's a great festival. It's the only free festival of this kind of caliber, at least in Arizona," Koch said. "We're a loose affiliation of players. We've all played together before, different jams and whatnot. This is the first time we've played in this configuration."For more information on the group and their music, look up Dave Koch on Facebook. For more information on the bluegrass festival, visit their website at www.prescottbluegrassfestival.com.Follow reporter Patrick Whitehurst on Twitter @pwdcourier
Contact
Sign up for Courier e-News Alerts
Most Read
7 days
30 days