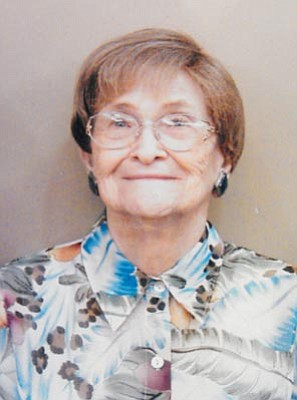 She attended public school in Gainesville, Texas and later graduated from North Texas State University in Denton, with a BS in Elementary Education.

Gladys married John Gardner in Gainesville on Jan. 7, 1941, prior to his service in the U.S. Navy. During the years of his service, she worked as a schoolteacher in Valley View, Texas and in the Finance Department at U.S. Army Camp Howze in Gainesville.

Reunited after the war, they homesteaded a 120-acre farm in Yuma, Ariz., for nine years, and then owned a ranch in Whitehall, Mont., for a short time. Relocating to Arizona in December 1959, they settled in Prescott, residing here the rest of their lives.

Gladys served in the House of Representative of the Arizona Legislature from 1965 to 1974. She served as a member of the Yavapai County Board of Supervisors from 1981 to 1988.

Gladys was always interested in education. She helped start the Education Foundation of Yavapai County in 1993 and served on the board. Then in 2001, she established the Education Scholarship Endowment of Yavapai County with a $100,000, donation from the Gardner Family Trust, John and Gladys Gardner Trustees. The endowment provides scholarships for students who aspire to become teachers.

She was a long time member of the United Methodist Church, Prescott, Ariz.

Gladys is survived by one son, John Allen Gardner; two grandsons, Cory A. Gardner, Yavapai County Constable of Prescott and Jacob Gardner of Veroqua, Wis. She is also survived by her step-daughter, Janice and her husband, Vernon Smith of Sunnyvale, Calif., whom she could not have loved more if they were her own. She is also survived by four step-granddaughters; 13 step-great grandchildren; and nine step great-great grandchildren; and several nieces and nephews.

Her husband, John passed away Dec. 4, 1997. She was also preceded in death by her brothers, A.L., George and Warren; as well as her parents.

In lieu of flowers, gifts may be sent to the Education Scholarship Endowment of Yavapai County, 2970 Centerpointe East Drive, Prescott, AZ 86301, (online at education-scholarships-yavapai.org) or the Prescott Salvation Army.

The family thanks Hospice Family Care.