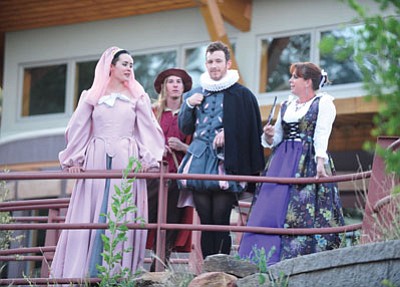 Les Stukenberg/The Daily Courier<br>Actors continuing to be in character wait for their stage entrance during the dress rehearsal for the Shakespeare in the Pines production of “A Midsummer Night’s Dream” at the Highlands Center for Natural History outdoor amphitheater.

Children and adults alike are in for a treat when they see Shakespeare's "A Midsummer Night's Dream" at the Highlands Center for Natural History's "Shakespeare in the Pines" performances on Friday and Saturday, June 27-28.

Laark Productions of Prescott is presenting the play, which is a fundraiser for the Highlands Center's education programs.

Magic and mystery will fill the forest as the Bard's immortal kings and queens, sprites and fairies cavort in a made-to-order forest setting. The cast of 22 characters is "under the influence of love, enchantment and delusion to the merriment of the audience."

After a dress rehearsal this past week, Lane Burkitt of Laark Productions said, "The kids loved it. It's understandable and accessible."

The "Shakespeare in the Pines" presentation of the Shakespeare play is true to the original that the playwright wrote centuries ago.

"It's completely traditional text," Burkitt said. The setting and costumes are traditional Elizabethan style, he said. It is "girls in pretty dresses and men with swords" in a theater-in-the-round, with the audience in the middle. "The actors are all over - the forest is the setting."

Tickets to each performance of "A Midsummer Night's Dream" are $50 per person and include a reception before the performances, which will feature locally brewed ale, wine, hors d'oeuvres and a chance to mingle with the actors. Each reception begins at 6:30 p.m., and two-hour performances begin at 7:30 p.m. Dessert and coffee will be available during the intermission at each evening. Tickets must be purchased in advance by calling the Highlands Center at 776-9550 or visiting its gift store. The Highlands Center is located at 1375 S. Walker Road in Prescott.

The actors in "A Midsummer Night's Dream" include students, local performers and veterans of the Arizona Shakespeare Company.

Laark Productions partners with local organizations to help them raise money for their work, Burkitt said, adding, "We are all about partnerships."

"A Midsummer Night's Dream" is "a full experience," Burkitt said. "The money is going toward education for kids. I want the audience to understand it's a fun show."