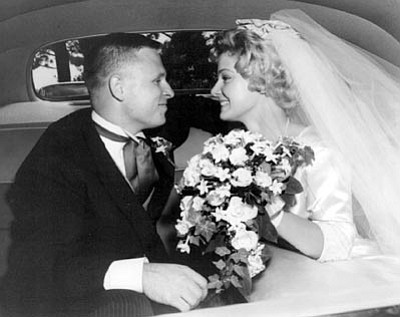 Stephanie Louise Ball and Philip Russell Casdorph were married on June 10, 1964, at St. Thomas Episcopal Church in Whitemarsh, Pa. Phil and Stevi met at Denison University in Granville, Ohio, where Phil was a member of Sigma Alpha Epsilon fraternity and graduated in 1963.

Stevi, a member of the Delta Gamma sorority, tried to finish her degree after they were married at a local college in Cleveland, but was interrupted in 1965 by the birth of their first son, Herman Ripley Casdorph (Rip). A second son, Philip Bradley Casdorph (Brad), was born in 1968. They have four grandchildren, Stefanie Carol and Hayden (Rip's children) and Chloe and Austin (Brad's children).

Phil initially went to work for Ohio Bell Telephone, but soon followed in his dad's footsteps and went to work for Metropolitan Life, where he had a 43-year career, with many top sales and manager awards over the years. He retired as a Regional Vice President in 2003, and he and Stevi moved to the Prescott area in 2006.

The couple enjoys training and competing German Shorthaired Pointers. They support the local GCP club as well as national events across the country. They also are involved with the Thumb Butte Questers and Westerners in Prescott and the Dewey/Humboldt Historical Society, in pursuit of another hobby, collecting and preserving antique mining artifacts.