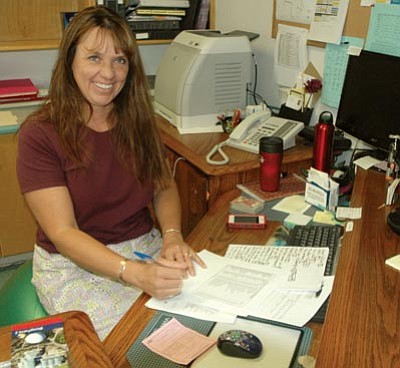 Patrick Whitehurst/The Daily Courier<br> Northpoint Expeditionary Learning Academy Director Geneva Saint-Amour works at her desk Friday, June 13. Saint-Amour will retire from the school at the end of the month.

PRESCOTT - Northpoint Expeditionary Learning Academy Director Geneva Saint-Amour will miss a lot of things about the charter high school when she leaves at the end of this month.

Most of all, she'll miss working with staff and hearing their stories of students successes, and reaching students those teachers feared they would never reach.

"We've done a lot of international travel in the years that I have been here. Through all of that, I think that just seeing kids who otherwise may not have found success in a high school setting and finding something here that works for them - those are the memories that are really valuable," Saint-Amour said.

Besides her role as director, Saint-Amour is also charter holder for Northpoint Expeditionary Learning Academy. She's been with the school since its days as a Prescott Unified School District (PUSD) facility. It's currently heading into its 10th year as a charter school, and Saint-Amour has been there for all of them.

Current Assistant Director Charles Mentken will step in as the school's new director on Tuesday, July 1. Classes resume at the school on Monday, Aug. 11.

"He's been here since Northpoint started also. He came over from Prescott High School," Saint-Amour said. "He also brings that 10-year development with him."

Saint-Amour's last day, meanwhile, will be at the end of June, which marks the last day of the current fiscal year.

"Many years ago I set the goal of retiring before the age of 50. It was really important to me to be able to see the freedom of retirement and enjoy that chapter of life. Having been in education since I was 21, I've seen a lot of teachers teach until they were worn out. They'd just given everything to the profession that there was to give, and they punched a time clock for retirement, and they're too exhausted to get out and do things, see the world, travel, and follow their pursuits."

Saint-Amour's pursuits are centered on travel. She and her husband Mike plan to take a converted VW Vanagon and "overland" into South America along the Pan-American Highway. Following that, they plan to continue traveling into their golden years.

Saint-Amour actually grew up around - and working on - cars, especially Volkswagens, thanks to her mechanic father. A clock over the door to Saint-Amour's office, made from a VW hubcap, came from the first vehicle she ever owned.

"It's kind of coming full circle to move into one now," Saint-Amour said.

Along the way, Saint-Amour says she plans to blog and post to Facebook about their adventures on the road.

Before it became a charter, Northpoint operated as a PUSD school for four years and was facing closure before it was transformed, Saint-Amour said.

"Knowing that was coming, a group of parents pooled their resources and money to have a charter written and appeal to the state to open it as a charter high school. It was a seamless transition turning it into a charter school," she said.

The school opened thanks to a grant from the Gates Foundation.

"At that time it was one of only 10 expeditionary learning high schools in the nation," Saint-Amour said. "Former PUSD Superintendent Kevin Kapp was really instrumental in being sort of the visionary and the support to keep this going. Even though he was coming from the leadership of a very traditional district with very traditional teaching methods, he saw the value in this style of school and he fought really hard to make this school open. As we look back at the first 10 years, it's really important to give a nod at the direction of Kevin Kapp and what he was willing to do in his role as superintendent."

For more information on the school, visit their website at www.northpointacademy.org.