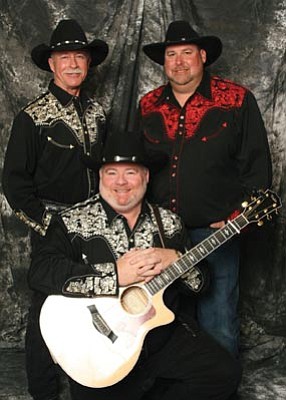 For many musicians, their desire to sing and play instruments came to them by osmosis - absorbing their parents' love for music and making music.

So it was for Matt Hughens, who will be the featured artist in the Prescott Opry's show on Thursday at the Elks Theatre and Performing Arts Center.

The Peoria resident is a native Arizonan who remembers his mother singing to records she played and his father strumming on his guitar.

"I would imitate my daddy's hands," Hughens said. Hard-pressed to buy the real thing and knowing he really wanted a guitar, his parents made their young son "a make-believe" guitar out of a 2x4 piece of wood with nails at either end to hold the rubber bands that were the instrument's strings.

Hughens' mother said he "was singing before he could talk," sitting on his swing, singing Charlie Pride songs.

Because of his father's inspiration, Hughens pays tribute to him in a song he wrote called "The Gift."

Hughens' music reflects the artistry of the likes of Bob Wills and Gene Autry, who "still inspire me today," he said.

Hughens started playing a genuine guitar when he was 9 years old, and has continued since, all largely because he remembers sitting "at my dad's feet and admiring the sounds that came from his guitar."

"This has been my inspiration," he said. And he takes this inspiration to his day job as well. Hughens is a nurse for Hospice of the Valley's inpatient centers, where he plays his guitar for patients and their families when an occasion for music arises.

The Prescott Opry show starts at 7 p.m. Thursday Tickets are $12 to $25. Get tickets by calling the Elks box office at 777-1370 or by logging onto www.prescottelkstheater.com. Tickets are also available at the theater one hour before show time.

The Ping Brothers - Frank and Doug - who are making their mark on the Prescott music scene since arriving from Lexington, Ky., a few years ago, will also entertain the Opry crowd with a couple of sets Thursday night.

Musician Ed Gary, who organizes the Prescott Opry, will perform and act as master of ceremonies. Other special guests are youth artists Glory and Bix Glidden and regulars the Brush Arbor Revival.