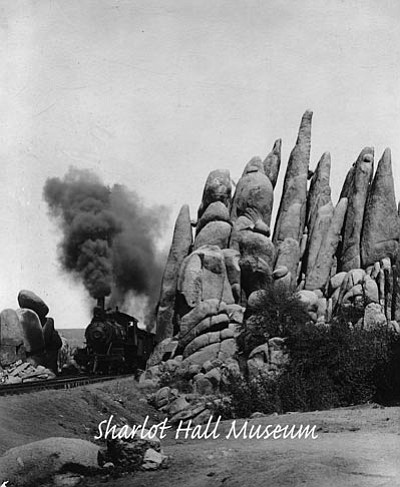 Prescott's first railroad, the Bullock line from Seligman, with all its problems, was continuing to limp along when a new player appeared on the scene.

Wealthy and politically powerful Joseph Reynolds came to Arizona Territory from St. Louis in 1887 looking for investments in minerals, and Oakes Murphy's younger brother Frank, a real estate broker, assisted Reynolds in the purchase of the Congress Mine north of Wickenburg. Reynolds needed a railroad near his new mine and wanted any extension from Prescott to Phoenix to go through Wickenburg while Bullock still wanted a Black Canyon route.

Reynolds made an offer to buy the Bullock line and Bullock agreed to consider the offer, but then continued stalling. While waiting for a response, Reynolds and Frank Murphy had the alternative route to Ash Fork surveyed. It was shorter than the Bullock route but would be far tougher to build.

Everything changed when Reynolds died suddenly in February 1891. His will left an ownership share in the Congress Mine to his protégé Frank Murphy who became leader of the Reynolds faction and continued the struggle to get the Prescott-to-Phoenix line built.

After four years of stalling by Bullock, it was past time for action. The Prescott & Phoenix Railroad was incorporated with Frank Murphy initially its secretary - later becoming its president.

Murphy's group now made a second offer to purchase Bullock's line since it had the most practical route. But again Bullock stalled. Murphy's group then decided to build a line from Ash Fork to Prescott and on to Phoenix along the Wickenburg route.

There were two alternatives for the Ash Fork to Prescott leg and a route through Limestone Canyon was chosen to avoid the well-named Hell Canyon. To give you an idea of the difficulties they faced, the 170-miles from Ash Fork to downtown Phoenix required 334 trestles - that's almost two trestles per mile. And the bulk of those trestles were in the stretch between Ash Fork and Prescott.

In November, a VIP party traveled over the first 18-mile stretch from Ash Fork. The story goes that one of the passengers compared the way the road wound through the mountains to a pea vine winding its way on a garden pole. The Peavine nickname stuck.

In early 1893 track construction reached Granite Dells and required heavy blasting and drilling - especially near Point of Rocks. When a series of extreme thunderstorms caused extensive damage nearby, some locals blamed the two months of sunrise-to-sunset blasting for the climate change.

On April 21, 1893, the track reached the Prescott city limits and daily service to Ash Fork of one passenger train and two freight trains began. The Peavine quickly took the lion's share of business since it was cheaper, faster and more dependable. To meet this threat Bullock had his coaches repainted and bought a brand-new and larger third locomotive. More to the point, he reduced rates for both passengers and freight.

Murphy responded to the price war with a reduction of shipping rates that Bullock was unable to meet. Both lines suffered from the reduced rates through the summer and Bullock had to discontinue operations and abandon his railroad to bankruptcy in October 1893. The Prescott railroad war was over.

The Prescott to Phoenix portion of the line was completed in the spring of 1895 and, with the addition of subsidiary lines carrying freight and passengers to the Jerome and Bradshaw Mountain mines, Prescott was for a time the operational hub of what was first an independent railroad system and then an important subsidiary of the Santa Fe. But when the mines in Central Arizona played out the auxiliary lines were abandoned and Prescott's role as a railroad hub waned.

With construction of the Prescott bypass, Prescott's days as a railroad town ended and the last passenger train left for Phoenix in 1962. The Santa Fe still runs a freight-only line from Phoenix to Ash Fork, but once past Skull Valley it no longer heads eastward towards Iron Springs and Prescott, but continues northward towards Chino Valley.

All the old roadbeds around Prescott are abandoned and the rails and ties have been removed, but they do make dandy hiking trails connecting Prescott to Chino Valley and Prescott Valley.

Days Past is a collaborative project of the Sharlot Hall Museum and the Prescott Corral of Westerners, International (www.prescottcorral.org). This and other Days Past articles are available at www.sharlot.org/library-archives/days-past. The public is encouraged to submit articles for consideration. Contact SHM Library & Archives reference desk at 445-3122, ext. 14, or via email at dayspastprescott@gmail.com for information.