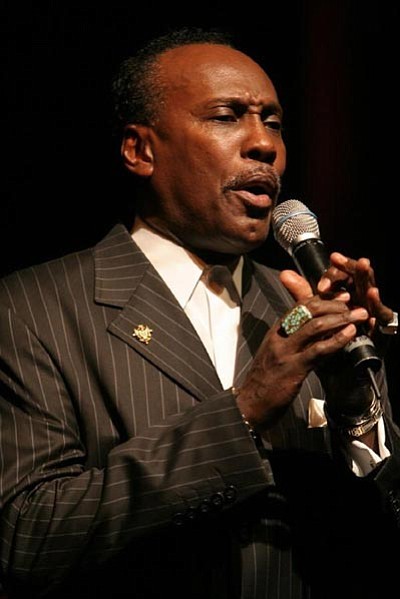 Dennis Rowland, a favorite singer among jazz aficionados, returns to the Highlands Center for Natural History amphitheater for a concert this Saturday evening.

He will be joined by singer, musician and songwriter Diana Lee for this performance, which is Prescott Jazz Summit's first "Howlin' at the Highlands" production for the summer season.

In December 2012, Rowland, a Detroit native and Phoenix resident, suffered a near-fatal stroke and cerebral hemorrhage, Mike Vax, Prescott Jazz Summit director, said. "This severely impacted his ability to sing," Vax said. "It was feared that his voice would forever be silenced."

But Rowland went through extensive therapy, and because of "his hard work and determination, his recovery is right on track and nothing short of miraculous," Vax said. "For Rowland, this performance will have special meaning."

From 1977 to 1984, Rowland was the voice of the world-renowned Count Basie Orchestra, sharing the stage with Ella Fitzgerald, Sarah Vaughan, Joe Williams and Tony Bennett. He is also featured on the Basie Band's Grammy-winning record "On the Road."

Theater-goers will recognize Rowland as well because of his appearances in many Arizona Theatre Company productions such as "Blue," "Little Shop of Horrors," and "Blues in the Night." His appearances in Phoenix Theatre productions include "Chicago" and "Once on This Island." In 2007, Rowland was inducted into the Herberger Theater Center Hall of Fame for his contributions to the performing arts.

Lee began touring as a professional throughout the southwest when she was 18 years old. In 1984, she formed the Donnie Dean and Dianna Lee Band. She has performed in many groups, including the Dennis Rowland Motown Revue, and has been featured with such stars as Sister Sledge, Reba McEntire, Diana Ross, Stevie Wonder, David Foster, Garth Brooks and many more.

Lee has also done commercial jingles and her original music has been featured in television productions such as "Sabrina the Teenage Witch," "Brimstone" and "Entertainment Tonight."

Rowland and Lee will be accompanied by the Jazz Summit All-Star Band.