Column: Tennis can boil down to topspin vs. underspin 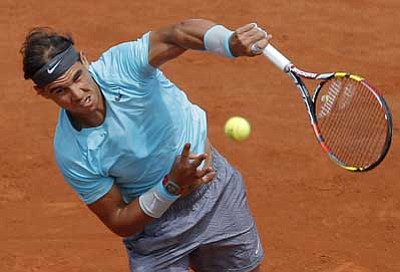 Michel Spingler/The Associated Press<br> Topspin or underspin? Spain’s Rafael Nadal hits the ball during the fourth round match of the French Open tennis tournament on Monday.

If you're the average tennis player who took up the game for fun and without too much formal instruction, you may want to read the different aspects related to topspin versus underspin. The term underspin is also known as backspin, and sometimes slice.

With topspin you swing from low to high brushing the ball - making it rotate forward. This stroke develops a very easy and natural offensive shot, and the harder you swing (with control and a flat racquet face) the more spin and lift you impart which become a safe feature in a good groundies.

The backspin/underspin stroke is hit from high to low (not so conducive to clear the net) with the racquet face beveled back which gives you many added variables to calculate, and is considered in most cases a defensive shot that's much harder to control.

Tennis is a lifting game. Most groundstrokes that bounce into your strike zone (about 80 percent) should be hit from low to high. The idea of good tennis is to minimize every chance for possible error. This is called percentage tennis, and it deals with stroke fundamentals and strategy of shot placement and movement on the court.

Much of the stroke production in a game situation is hitting shots under pressure, which is much different from a pro feeding you a nice ball and having you hit to a spot without an opponent bothering you. And hitting from low to high as opposed to the opposite will create a lot less stress and pressure.

If you were like me picking up the game you may have learned a few basics from someone who took you under their wing and then you were on your own to develop your own strokes from there. The forehand is fairly forgiving if you let the ball get a bit close to your body. You can still pull off a low to high swing and slowly but surely develop a brushing topspin to the shot.

Whereas on a one-handed backhand groundstroke you have to make contact further out in front of your body. If you let the ball get inside that strike zone you have no choice but to hit a backspin shot, and without much instruction most tennis players acquire that shot relying on the self-defense a close ball to the body creates. There is no forgiveness on the backhand side. Now a two-handed backhand is a different animal and more like hitting a forehand.

So for many years my game consisted of a topspin forehand and a slice backhand. In tournaments, the better players didn't take much time to realize which side to hit to, and it wasn't that I was bad with my backhand, but with a slice you're almost always hitting defensive returns that bounce and set up. A good player will quickly put you in a pickle and then finish you off.

It came to the point that either I make the change of learning to hit from low to high on the backhand side or live with losses that could be prevented.

So with the right stroke pattern, a lot of mental perseverance and a few losses from getting used to what needed to take place, as well as about nine months of practice, the change took place and there have been no regrets and much more success.

With the topspin stroke there are only two variables and you can swing almost as hard as you want. Number one is just keeping the racquet face flat to the back of the ball, and the second is how much upward brush you wish to impart for how hard you're swinging.

If you happen to be the backspin king or queen and want to make a very positive change to your game, maybe this column will be the catalyst to help that cause.

Universal tennis catch-phrases to be aware of
Column: Tricks to aid your tennis game
Many styles of play; Merry Xmas, happy holidays
Column: Getting a grip on things by using the correct grips in tennis
Column: Unconventional shots can be fun