Shakespeare revisited at the Blue Rose for one performance 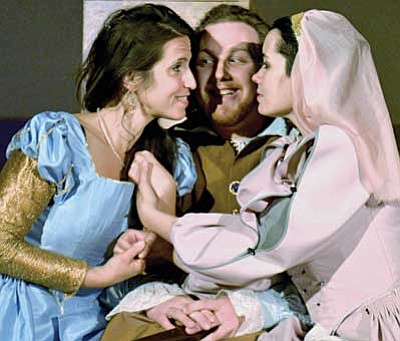 Karla and Lane Burkitt, Prescott Valley residents for 28 years, incorporated Laark Productions for theatrical events and short films, although they've been producing plays for the past 25 years.

This month, they partnered with the Highlands Center for Natural History's annual fundraiser, Shakespeare in the Pines, to produce A Midsummer Night's Dream in the outdoor Center to sold-out audiences. A repeat performance of the play at the Blue Rose Heritage and Culture Center in Prescott Valley takes place Sunday, Aug. 17, on the outdoor stage.

During the school year, Karla teaches drama classes half the year to junior high students, and half the year to elementary students, in addition to after-school drama classes. Each year, the kindergarten through third grade students put on an original musical production; the fifth-graders do the same concentrating on grammar and speech; and the fourth grade classes write and perform an opera.

"In the summer, I get to work with grown ups," Karla said with a laugh.

The Highland Center was a perfect partner for this particular Shakespeare play.

"A Midsummer Night's Dream is all about being out in the forest, in the natural world," she said. "Kids really enjoyed it because it has a lot of goofy comedy."

Once one gets past the language barrier, Shakespeare is easy to understand, Karla said, because he writes about universal characters - the heavy parent, the rebellious daughter, a feuding couple.

She created costumes for six years for the now-defunct Arizona Classical Theatre, and designed and built about half the costumes for July's production. Lane has worked with Karla on dozens of productions in Prescott, acting, directing, co-writing, and providing technical direction with lights and sound.

The rehearsal process was a challenge to get 22 people together at the same time from Prescott, Prescott Valley, Chino Valley and even students from Northern Arizona University in Flagstaff.

"We were more successful than we hoped. Everybody said we'd like to do this again," Karla said.

She and Blue Rose owner Jody Drake are discussing offering on a regular basis a "Shakespeare Sunday" at the Blue Rose.