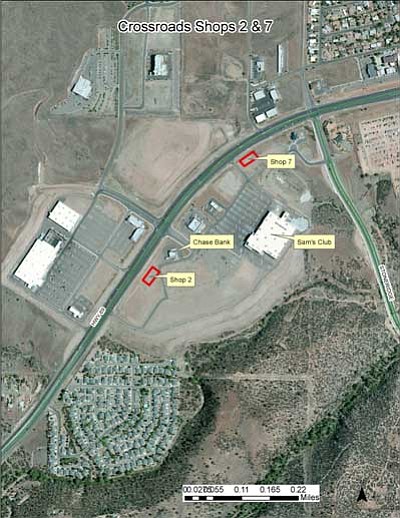 Courtesy of Prescott Valley <br> Shops 2 & 7 in Parcel C on the south side of Highway 69 will add over 15,000 square feet of commercial space, including parking, at the Crossroads in Prescott Valley.

More retail is in store for Prescott Valley as the Crossroads' Kitchell Development gears up to complete additional spec buildings adding 15,000 square feet of new commercial space south of Highway 69 near Sam's Club.

The council approved the final development plan for spaces two and seven within Parcel C of the undeveloped Crossroads and a representative from Kitchell mentioned, during the meeting, that in the next few months more retail development plans could be in the works.

In 2005 the council approved a second amendment to the Crossroads development to encourage commercial development on about 72 acres north of Highway 69 and around 51 acres south of Highway 69, therefore approving the building permits for Home Depot, Sam's Club and Cracker Barrel.

In 2009, council approved another plan for the remaining 14 acres of parcel A that included Hobby Lobby and the Dollar Tree.

According to a Garrett-Walker representative, the company closed 25 homes last year and remains on target to sell 128 this year. Garrett-Walker also sells homes in the Brightstar community in Chino Valley.

Utilities Manager Neil Wadsworth presented information about the Northside Sewer Installation Project, one of the largest capital projects for the town this fiscal year.

The council readily approved the construction contract that would provide a sewer system trunk main to the northern part of town to Highway 89A. This project would stimulate commercial growth in that area, as Viewpoint and Pronghorn subdivisions already nestle against that major roadway.

Wadsworth explained that the design process for the project began in 2002, but with the recession, everything fell through.

Now, the design process is complete and staff put out bids several weeks ago. The town received 10 bids and awarded the construction contract to Capital Improvements, LLC in the amount of $1.1 million.

The project could see completion by early spring.

The council also approved an amendment to the PV Pipeline Multi-use Path project that allows for the addition of federal grant monies toward the completion of that project.