Column: Come on, MLB, the right guy is right there 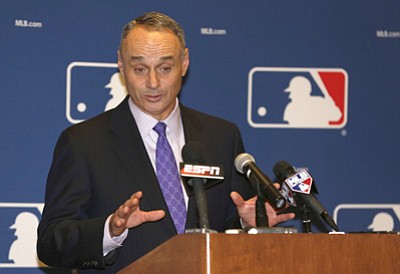 The intrigue surrounding the search for Bud Selig's successor shows that even successful individuals, usually a prerequisite to owning a Major League sports franchise, can be petty, selfish and subjective.

Selig has held the title of baseball commissioner for 22 years, the second longest tenure of any of the sport's commissioners. At 80 years old, he is determined to step down next January. Selig has been down this road twice before and each time has been persuaded to re-up for an additional term. While some owners have expressed a desire for a three-peat, the commissioner is adamant that this time he means what he says. To emphasize that point, in May he appointed a seven-person search committee and charged them with finding his replacement.

However, the use of the term "search" is a misnomer. The majority of committee members are Selig loyalists, team owners who have supported - and been rewarded by - the commissioner. If Selig has his druthers, the next commissioner will be his deputy, Rob Manfred. Manfred has been head of the league's labor relations department since 1997. In that role he has served as the owners' chief negotiator on several Collective Bargaining Agreements with the MLBPA.

Manfred may be the person most responsible for repairing what can best be described as a formerly toxic relationship between owners and players. The result of his efforts has been two decades of labor peace in baseball. Manfred knows his way around the sport having worked with all the owners on a variety of significant issues that MLB has faced in the past and will continue to face in the future, including drug testing, TV contract negotiations and franchise transfers. Manfred worked tirelessly on the complicated sale of the Los Angeles Dodgers in 2012.

And yet there are a number of owners, led by Chicago White Sox Chairman Jerry Reinsdorf, who are not prepared to anoint Manfred as Selig's successor. The outspoken Reinsdorf has been one of the commissioner's most loyal supporters. That relationship has given Reinsdorf a direct line to Selig along with a voice in every major decision the commissioner has made. Selig even appointed Reinsdorf to the search committee knowing that the White Sox owner was not a Manfred supporter.

Apparently, Reinsdorf's concern is that he will not have the same access to Manfred that he enjoyed with Selig, thereby reducing his influence in the sport. That potential loss of power is clearly more important to Reinsdorf than what is in the best interests of baseball, not to mention his own pocket. As a hardliner on player relations issues, Reinsdorf has not always seen eye to eye with Manfred, despite the fact that labor peace has brought untold riches to baseball - including team owners - that could only be dreamed about 20 years ago.

Reinsdorf is facing an uphill battle to find someone other than Manfred to succeed Selig. His personal choice, former Deputy Commissioner Steve Greenberg, son of Detroit Tigers' Hall of Fame first baseman Hank Greenberg, declined to become a candidate. Another potential candidate from outside the sport, Disney Chairman and CEO Bob Igor, seems reluctant to throw his hat into the ring. Igor's strengths include his marketing savvy, something MLB seems hardly in need of at this point.

Under Selig, the sport has done quite well marketing itself, and not because the commissioner is a marketing whiz. Despite spending his first life as a car salesman, Selig looks and acts more like a disheveled professor than a marketing genius. But the commissioner is astute enough to surround himself with savvy executives that complement his strength as a consensus builder. As Selig's protégé, there's every reason to believe Manfred will do likewise.

The last outside marketing genius to become commissioner, Peter Ueberroth, led baseball into collusion, which ultimately cost the owners nearly $300 million. Selig has said that the next commissioner needs to understand baseball's "culture," which Ueberroth never did. Igor may or may not be aware of it but we know Manfred clearly is.

It takes 23 votes from MLB's 30 owners to elect a commissioner. By some projections, Manfred already has 20. Here's hoping that instead of following Reinsdorf's lead, at least three more owners put the best interests of the sport above whatever their own personal agendas may be.

Jordan Kobritz is a former attorney, CPA, and Minor League Baseball team owner. He is a Professor in the Sport Management Department at SUNY Cortland and maintains the blog http://sportsbeyondthelines.com. Jordan can be reached at jordan.kobritz@cortland.edu.

Sports Beyond the Lines: Selig not riding off into sunset anytime soon
Column: Face it, baseball has never been better than under Bud
Column: MLB pace of play idea has universal appeal
Column: The best sports commissioner of all time is ...
Baseball owners extend Manfred's contract, TV deal with Fox