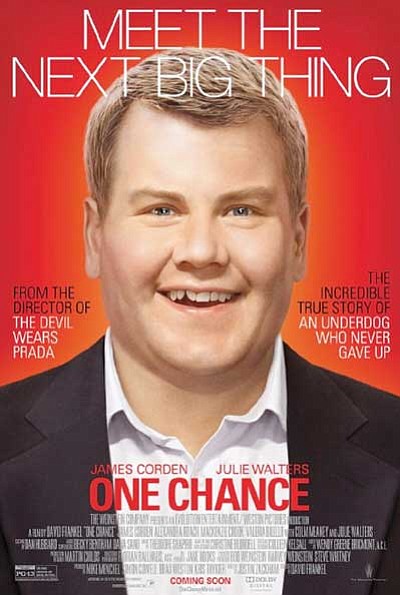 The Prescott Film Festival kicks off its fifth annual fest with several significant firsts to celebrate this anniversary, during its host of film screenings from Wednesday, July 23, through Sunday, July 27, at the Yavvapai College Performing Arts Center.

• The presentation of 3-D movies, "American Mustang" and "Wild Horses," which will show at 3:30 and 6:30 p.m. at Harkins Theatres in Prescott Valley. This one event will not take place at the college's Performing Arts Center. The $10 tickets for these movies may be obtained at the door or on the Prescott Film Festival website, www.prescott

• A third new feature for the film festival, director Helen Stephenson said, is a sneak peek of a studio film, "One Chance," which is due out in late August and is about a shy shop worker by day and amateur opera singer by night who is a victim of bullying. The film is a Weinstein Company production, Stephenson said, and screens at 6:30 p.m.

Besides "Oxymoron," Thursday evening's presentations will include retrospectives on Asner's and Rydell's careers, a question-and-answer period, and a screening of "Good Men," written and directed by Brian Connors and starring Asner and Rydell. Its forcus is allegations of conspiracy in the Sept. 11, 2001, terrorist attacks on America. "Oxymoron" is a "raucous comedy" with a sibling rivalry story line, Connors said.

Thursday's entertainment is for mature audiences, Connors and Stephenson said. Tickets for this particular evening are $20 and $35, available at the door or contacting the college box office at 776-2000 or visiting www.ycpac.com.

Saturday's programs include a workshop by author Alan Dean Foster on the topic of the film "Dune" and its lasting legacy in the science fiction world at 3:45 p.m. in the college's building 15, room 209.

"The Cowboys," starring John Wayne, which Rydell directed, will screen at 3:30 p.m. Saturday, and Rydell will be on hand to talk about this film.

At 6:30 p.m., the film festival will present a documentary, "Jodorowsky's Dune," the story "of the greatest science fiction film that was never made," with Foster as special guest.

Earlier in the day, at 10 a.m., "The American Nurse" will screen and has a Prescott connection, Stephenson said. The nurse in the film is the brother of a Prescottonian.

Each day of the Prescott Film Festival will offer screenings of films and other events, such as workshops. Except for the evening with Asner, Rydell and Connors, all tickets are $10.

And, after parties are even more highlights, Stephenson said. These will take place at 9 p.m. Friday and Saturday and at 6:30 p.m. on Sunday in the cabaret near the Performing Arts Center stage. These feature wine-tasting, live music and appetizers at a cost of $25.

Sunday's party will be preceded by wine tasting at 2 p.m. before a film that tells the story of Aerican wine. Awards at the 6:30 p.m. party will go to winners selected by all the flms' audiences during the festival.

"This is our fifth annual festival and it is going to be the best fest yet," Stephenson said. "This is the first year our audience will get to experience the new seats in the Yavapai College Performing Arts Center, the sound and projection in the Community Room at the college, (which we call the SNW Theatre) are both upgraded, we have a record number of filmmakers attending, fabulous workshops including two on screenwriting and one from one of the top underwater cinematographers in the world, Tom Campbell, amazing films from all genres - just something for everyone."