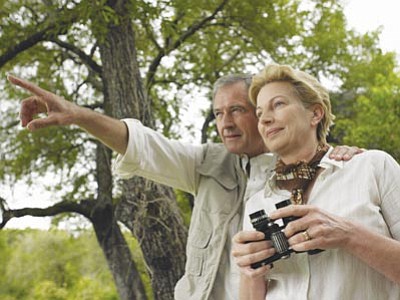 This past Saturday I led a Jay's Bird Barn sponsored bird walk. When one of the participants arrived at the store, she said she had left the house in such a hurry she had forgotten her binoculars.

That was no problem as we have shelves full of binoculars, so I grabbed a pair and said I would put a strap on it as we drove to our destination. With hat and binoculars in hand, I jumped in the car and we were on our way.

I had remembered to grab my scope and tripod so I figured somehow I would make it work. This was an interesting test of my abilities - to identify birds at a distance with the naked eye. I found myself relying on other abilities such as watching bird behavior, and relying on my listening skills to identify birds by their vocalization. Not having binoculars forced me to focus with greater effort since I couldn't rely on my ten power Swarovski binoculars.

We spent the morning in a mixed forested habitat with ponderosa pine, aspen and a variety of other small trees and shrubs typically found in a mountainous area. We had a great morning and found and identified a variety of birds including western bluebird, house wren, acorn woodpecker, western wood peewee, white-breasted and pygmy nuthatches and mountain chickadees to name a few.

Our efforts to find birds were richly rewarded as we continued to find additional species one after another. Our list was growing and we were getting great looks at some really good birds. At one point, I heard a painted redstart so we went looking for it. Not only did we find it but we also got to witness it displaying its colorful plumage, vocalizing, and gleaning on the bark and in the foliage of a ponderosa pine tree.

Later in the bird walk, we were hearing the vocalization of both a plumbeous vireo and a cordilleran flycatcher. With a little effort, we were successful in finding both species. We also found other species by hearing them first including brown-headed cowbird and western tanager.

Throughout our walk we saw several large species flying over-head such as a cooper's hawk, a couple of turkey vultures, a common raven, and a red-tailed hawk. The best fly-over however was seeing a zone-tailed hawk in flight. At one point, a red-tailed hawk and the zone-tailed hawk were sharing the same thermal. There were moments when it seemed as though there was going to be an altercation between the two, but they managed to behave themselves!

As we returned to the store after a very successful outing we did a little detour and stopped by the location of the nesting Swainson's hawks. Using the scope we were able to see one of the juveniles in the nest preening itself. What a great way to end our bird walk.

Jay's Bird Barn offers free guided bird walks every week. If you would like to participate, I encourage you to check out the schedule of upcoming bird walks at www.jaysbirdbarn.com. Please call the store at 443-5900 to sign up - we limit the groups to 12 individuals.

Eric M. Moore is the owner of Jay's Bird Barn, with two locations in northern Arizona - 1046 Willow Creek Road in Prescott, and 2360 State Highway 89A in Sedona. Eric has been an avid birder for over 45 years. If you have questions about wild birds, email eric@jaysbirdbarn.com.

Moore: Birding at Date Creek Ranch
Column: Birding trip yields many surprising discoveries
Birds - and snakes - are out in force
Column: Birding on New Year's Day
Be on the lookout for zone-tailed hawks
Event Calendar