Column: Tennis in Prescott is on the move with new, updated courts 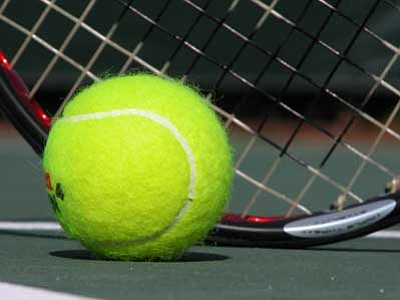 With the Yavapai College courts being rebuilt, tennis in Prescott has been a bit topsy-turvy in many regards to where people congregate to play their weekly games, drop-ins, tournaments and such.

The subdivisions are seeing a lot more play, so are the Prescott High School and Armory courts.

Since the old Prescott Racquet Club - now called the Prescott Athletic and Racquet Club - has reopened with all seven of its courts in good condition, they have been running the tennis Grand Prix events and open clinics to the public. It even hosts USTA league matches.

USPTA Pro Sterling Fetty has his Junior Academy humming along for kids of all ages and abilities and does a great job of getting them to play in events around the Southwest. He's soon to be taking a group of juniors to San Luis Obispo, California, for a week-long camp with former Prescott pros Miguel and Jenny Phelps, who now reside and teach at a fancy club there.

Tennis Professional Allison Wood is a woman around town towing hoppers of balls from one complex to another with her weekly lessons and clinics, while Ron Barrons teaches at the racquet club, Prescott Country Club in Dewey and the Boulders Resort down in the Phoenix area.

Joe Borzello, the coach for Bradshaw Mountain High School, is at the high school facility doing weekly camps and lessons for the Prescott Valley tennis contingency.

And, yes, I'm out at the club staying busier than ever with weekly lessons, clinics, play groups and tournaments having a good time with the troops.

It seems the David Rainey/Russ Wagner group is holding their drop-in at the Haisley subdivision courts; the Ron Samuelson and Charlie Harbeson groups are at Yavapai Hills; Giorgio Rey and his followers are at Embry-Riddle; and Lennie Smith is at StoneRidge. Tony Savarino and the Chino-billies do their play at the high school a couple times a week.

So, tennis is vibrant.

The Prescott Area Tennis Association has been quite busy with completing the fund-raising efforts for the new Yavapai College tennis facility and has raised nearly $200,000 to help make that a reality. Recently, the City of Prescott joined in that effort and will give $25,000 to help the cause as well as repave the parking lot between the new tennis facility and the baseball complex at Roughrider Park - to the tune of about $80,000. Karen Spears has been the driving force in this fund-raising drive along with many on her committee and the Yavapai College Foundation staff.

Many of the tennis facilities in the area are being revamped, some being rebuilt, others having a facelift. I've been told that the Prescott High School courts will soon have cracks fixed and be resurfaced. Prescott Canyon Estates will most likely be having some work done and in the future. StoneRidge just had its court repainted, as did Yavapai Hills for its facility.

But, the really exciting news is that the Yavapai College tennis center will be up and running soon. Six post-tensioned concrete championship courts and a new stadium court - all with state-of-the-art lights, seating and viewing areas, 10 and under lines on the upper two courts, new and expanded tennis programs and no more crisis management. This facility will be what every community will want to have in their future.

Look for many meetings to be put together soon, to discuss the future of tennis in the Prescott area. Your ideas, volunteerism, and making sure you have your racquet ready to rock and roll will continue to give our community the ingredients to create an atmosphere of fun and competition with this special game called tennis.

Column: The current state of tennis in the area
Howard: Is it time to build a recreational facility?
Column: Tennis doesn’t prosper without the help of many
Column: Reflecting on 35 years of the Prescott tennis scene
Column: Catching up with the Prescott Area Tennis Association