Sons of the American Revolution raise $11,500 for WWII veterans 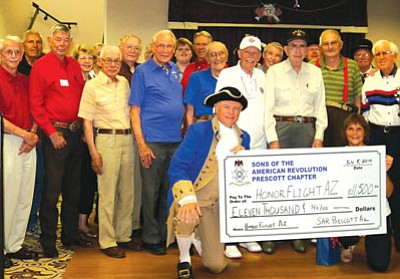 Courtesy photo<br> Steve Monez, President, of the SAR Prescott Chapter presents a check to Susan Howe, the Founder of Honor Flight and a Prescott resident.

The sons of the American Revolution annual Ice Cream Social took place July 5 at the Las Fuentes resort. Thanks to Las Fuentes and Cindy Schubert, social director, for arranging the room, ice cream and serving area. John Thorne, an SAR member, has worked with Cindy for several years.

The World War II Memorial was built in Washington D.C. in 2004 and many of the veterans had passed away by that time. They are dying at the rate of 1000 per day. Their average age is 91. The Honor Flight was started to help the vets travel to their memorial at no cost to them.

It costs about $900 per vet and each one is accompanied with a guardian. The guardians pay their own way. They are needed to help as many are wheelchair-bound. Many veterans would never have the chance to see the memorial if it were not for the Honor Flight.

Last year the goal was $5,000 and $4,500 was raised. Bill Hazen, one of our members, thought it could double it this year. Many thought the goal of $10,000 was unrealistic. Everyone thought this was such a worthy cause and several of the members committed $1,000 each, yet they were still far from our goal. Bill Hazen raised more than 20 percent of all the money and he never gave up hope that they could reach their goal. All the members and the generous support of the people in the communities all helped to make this happen.

The social was a huge success. There was music from "The Lest we Forgetters" a group from the children of World War II veterans. Everyone had as much ice cream as they could eat. A raffle was held to raise more money for the vets.

There were two guest speakers, Colonel Wayne Daniels, a B17 pilot shot down in Germany, and a World War Ace, Major Ralph Wandrey, who shot down 12 planes in P38s and P47. They spoke of their experiences.