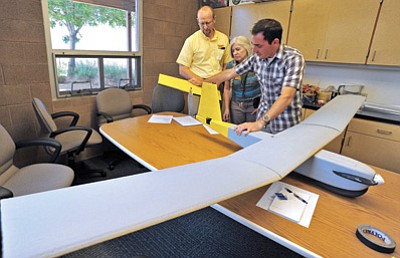 But they won't be doing any spying. The sUAS are part of a new program under development at Yavapai College that would use UAS for safety programs, including fire sciences, emergency management and agricultural studies. The planes will be restricted to the 80 acres of airspace over the college's agri-business property in Chino Valley as part of a recent Federal Aviation Administration agreement that allows the craft to operate below 400 feet.

The FAA agreement is one part of a new partnership between the college and Swift Radio planes, a local Prescott business that manufactures unmanned aircraft. The college plans to initially lease an aircraft from the local company.

"It's been kind of a long process because we had to get a COA (certificate of authorization) from the FAA. That process took us a couple of years to do. We're going to take the bulk of this year to try to develop this program," Morgan said. "The largest portion of everything we're going to be doing is really data analytics."

The FAA-approved sUAS itself measures eight feet in wingspan, weighs approximately 10 pounds, and carries a battery allowing 90 minutes of flight time, with a cruising speed of 40 miles per hour. The sUAS drones were designed for research and humanitarian missions, said Stephen Rayleigh, owner of SWIFT Radioplanes. The planes, made of Kevlar with a foam interior, cost approximately $10,000, Rayleigh said. Additional models, such as the quad-copter design and others, could be approved should the programs prove successful.

"Yavapai College is uniquely situated with all these great hands-on programs. I like to see applications with sUAS, or drones, where you can really help people. You can save time and you can save money, by helping a farmer use less water or less fertilizer, or you can save lives, like with search and rescue," Rayleigh said. "You can use drones for all that. UAS can use thermal-imaging cameras. Those cameras can actually see through smoke and see people working the fires and the firelines. It's a great tool for situational awareness."

The potential for drone use, outside of unmanned deliveries as suggested recently by Amazon.com, includes marine research, geological surveys and much more, Rayleigh said.

"It's a tool that is emerging as a very critical tool. People are just now starting to think about all the applications. Everybody equates the applications to what the early phases were, which was primarily military, but now things are changing globally. Now people are seeing tremendous opportunity," Morgan said.