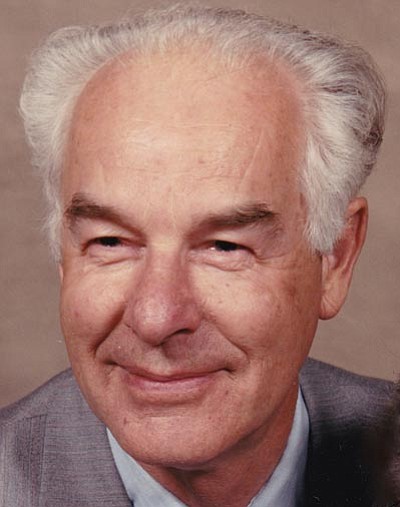 He grew up in Castlewood, S.D., where he worked in his dad's auto repair shop and graduated Valedictorian of his graduating class of 1939. After Business College, he worked as a bookkeeper at the War Department in Washington, D.C. Gail and his wife Donna were married April 5, 1941 in Virginia. He was drafted into the Army in August 1944 and served in an Armored Infantry Battalion in Germany until the war ended.

Under the GI Bill, he studied accounting and Income Tax Law and worked for the Internal Revenue Service in Council Bluffs, Iowa, Atlantic, Iowa and Des Moines, Iowa. He and Donna raised five children in Iowa before moving to Prescott in 1979, after 35 years of government service. At his church, he volunteered as church treasurer, board member and Sunday school teacher. He loved woodworking and exploring old mining towns around the great state of Arizona.

Gail is survived by daughter Linda and Rich Diehl of Sun Lakes, Ariz.; son Richard and Dorothy Taken of Moore, Okla.; son Steve and Mary Taken of Eunice, N.M.; and daughter Tammy and Gary Spruill of Peoria, Ariz.; 11 grandchildren; 18 great-grandchildren; five great-great grandchildren. In addition to his parents and one brother, Gail was preceded in death by his wife Donna of 72 years; two daughters, Joan Marie Taken and Ruth Ann Schumaker; a grandson and a great-granddaughter.