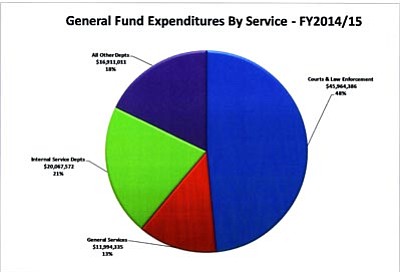 PRESCOTT, Arizona - The Yavapai County Board of Supervisors gave tentative approval Monday to a $200 million budget for the fiscal year that began July 1.

That's an overall increase of 5 percent, but the county is spending $336,000 below the amount that would require a "truth in taxation" hearing. The county could have spent another $6.7 million under state levy increase limits, too.

That average drop assumes a property taxpayer won't see an increase in his/her property values in comparison to other property taxpayers. Some homes might end up seeing an increase because centrally valued properties saw their values drop in comparison to residential properties. Centrally valued properties are valued by the state because they cross county lines, such as mines, electrical transmission lines and pipelines.

The supervisors made a strong effort to keep property tax revenues the same as last year, and they praised county employees for helping them.

"It wasn't easy to do," Supervisor Chip Davis said.

"We're trying to show the public you are being very conservative in property taxes," County Administrator Phil Bourdon said.

The county's two major special districts that get their money from property taxes, Flood Control and Library, have the same property tax revenues as last year. Their respective budgets of $7.7 million and $4.3 million dropped 9 and 10 percent, respectively.

Costs related to law enforcement including the Sheriff's Office (with the largest budget at $17.3 million), County Attorney ($7.1 million), Public Defender ($5.3 million) and Superior Court (4.7 million) make up 48 percent of the general fund or $46 million, a pie chart at Monday's meeting noted.

That's why the supervisors want to double the quarter-cent sales tax for the Jail District to build a new jail, Davis said, since $43.4 million in property tax revenues makes up the largest single source of money for the $94.9 million general fund. The general fund also gets $26.6 million from statewide sales tax revenues.

Other courts and law enforcement related expenses include adult and juvenile probation, court clerk, constables and justices of the peace.

The $46 million worth of courts and law enforcement costs do not include the $16.8 million for the county Jail District, supervisors noted.

The county also has a half-cent on the dollar sales tax that goes toward its general fund, capital improvements and regional roads that officials estimate will bring in $15.2 million this year, or 6 percent more than last year.

The county's approximately 1,700 employees (including 1,395 full-time workers) will get a one-percent cost of living raise. Some longer-term employees also get 1 to 3 percent "compression" raises to separate their salaries from new hires, since county employees have seen raises only once since 2008. The longest-term employees won't get those compression raises, however, because they have reached the top steps for their positions.

Polk said she will use leftover grant money to cover the $162,835 cost for the raises in next year's budget, then the money will have to come from the general fund.

Polk said she's lost six attorneys in the last 12 months for higher government salaries, and four are staying in the Prescott area.