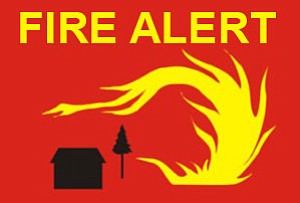 U.S. Forest Service officials are dropping their fire-use restrictions on the Coconino and Kaibab national forests in northern Arizona today.

Restrictions remain in place on the Prescott National Forest, state trust lands, U.S. Bureau of Land Management property in Arizona, and all private properties in Yavapai County, however.

Yavapai County has not received as much rainfall as its neighbors to the north.

Prescott got its first rain in 69 days Saturday, with a monsoon downpour hitting the Prescott Frontier Days parade. About a half-inch of rain was recorded at the airport.

Flagstaff already has recorded 1.96 inches at its airport, while Williams has registered 1.26 inches.

Prescott has a 50-60 percent chance of thunderstorms through Wednesday.

"We are a long way from relief from our very dry conditions," Prescott National Forest Fire Staff Officer Pete Gordon said. "We need to see monsoon rains on a daily basis and widespread across the forest for a couple of weeks in order to significantly reduce the wildfire risk.

"While current forecasts are favorable, we are ready for the possibility that this pattern could regress, leaving us with a dry period again.

"Our firefighters will be busy taking care of lightning fires for a while, so we ask our local residents and visitors to the forest to remain vigilant and be careful so that we don't have any human-caused wildfire."

Coconino Forest officials are evaluating conditions in Fossil Creek and plan to decide later this week when it's appropriate to reopen that area.

"With the onset of the monsoon season, the low number of human-caused fire starts, and the availability of many firefighting resources, we are comfortable that it is the appropriate time to lift fire restrictions," said Holly Kleindienst, deputy fire staff officer for the Kaibab National Forest. "Fire restrictions were extremely effective this year in reducing the number of fires caused by people. We are thankful to our visitors for their help in preventing fires by complying with the restrictions that were in effect."