Opry promises 'firecracker of a show' with New Prescott Playboys 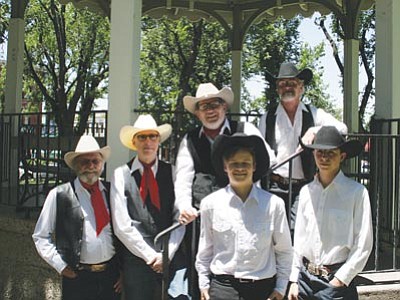 Not wanting to be left out of America's birthday celebration, the Prescott Opry is planning "a firecracker of a show" for Thursday, July 10, at the Elks Theatre and Performing Arts Center.

Starring in the show will be Margie LeBlanc, who's coming all the way from Texas to sing; the New Prescott Playboys; young fiddler Kiva Rain Keith; and gospel music regulars the Brush Arbor Revival.

New Orleans-bred LeBlanc, now a Texan, says music has been her life from he time she was very young. She started singing at 2 and appeared on a television show when she was 3 years old.

LeBlanc used to play clubs and now does a lot of stage shows, she said, including performing with opry groups in east Texas. She has also sung with major country music stars.

"I'm a traditional country singer," LeBlanc said, "but I also do gospel, western swing and old '50s rock and roll."

On their play list are such favorites as "San Antonio Rose," "Ghost Riders in the Sky," Old Fashioned Love in My Heart," "Cherokee Maiden," and "Across the Alley from the Alamo."

By getting back to this one genre, "People are going to know what they are hearing when they come to hear it," Johnson said. "We're keeping the western swing that was the Prescott Playboys alive - that jazz and cowboy flavor. It's really fun."

Johnson said he leans toward the western swing melodies, although he had advice long ago that "diversity " is key to success.

"I can play whatever you put in front of me. I play all the different styles," he said, adhering to the mentor who taught him that.

Johnson enjoys playing across the genres - rock, jazz, rhythm and blues, gospel, Broadway, "whatever," he said. "In fact, it's kind of boring to stay in one style."

The Prescott Opry strikes up the bands at 7 p.m. Tickets are $17 with group, student and senior discounts available. To get tickets, call the Elks Theatre box office at 777-1370 or visit www.prescottelkstheater.com.