Monsoons a welcome relief from drought 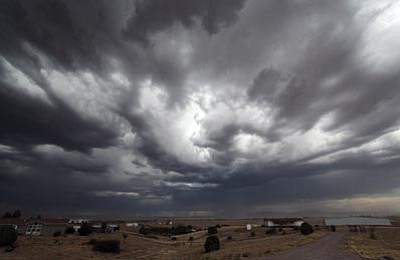 Monsoon clouds rolled into Prescott Monday with the promise of bringing rain to the parched landscape.

It hasn't rained in Prescott since April 27, and June tied the 116-year record with zero rain. June is traditionally the driest month with a long-term average of only 0.38 inches. May saw only a trace.

The first six months of the year have added up to the third-driest January-June on record, with only 0.97 inches falling at Prescott's Sundog measuring site according to the National Weather Service. It was the eighth driest for Flagstaff and 14th driest for Winslow, the Weather Service reported.

The heat is helping to draw in the monsoon. Despite decent clouds, it hit 98 degrees Tuesday at the Prescott airport.

The Weather Service issued a thunderstorm warning for the Ash Fork area Tuesday as isolated storms moved in.

The chance for thunderstorms in Prescott is forecast to increase from 10 percent Tuesday to 20 percent today, 30 percent Thursday and 40 percent on Independence Day. The Weather Service lists at least a slight chance of showers and thunderstorms every day for the forecast period ending on Tuesday.

Some of those storms could produce little precipitation alongside dangerous lightning. The early days of the monsoon can be especially dangerous for wildfires. Fire-use bans remain in effect.

Forecasters are watching two tropical storms, Douglas and Elida, to see if they move into the Gulf of California and fuel Arizona's monsoon moisture this week.

The ultimate strength of the currently developing El Niño is still a subject of debate, but a strong one can pull more moisture up from the gulf, according to CLIMAS (Climate Assessment for the Southwest).

Monsoon generally means seasonal winds or rainy season, and it's derived from an Arabic word for season. It's driven by the sun heating up the land and the Pacific Ocean at different rates, the CLIMAS website explains. The warmer land creates low-pressure zones as hot air rises. Once this pattern establishes across a region, the winds shift to fill in the void.

The monsoon months of July and August traditionally produce more rain than any other months in Prescott, with an average of 2.87 and 3.18 inches respectively, or about one-third of the city's annual precipitation.