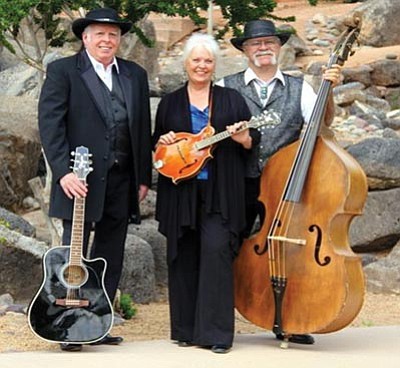 Courtesy photo<br>Steve Christiansen, Deanna Killebrew and Ken Killebrew will perform in the Johnny Cash Tribute Show Friday afternoon in the gazebo on the courthouse plaza.

Musician Steve Christiansen's Minnesota roots didn't nurture his love of country music, so he pulled up stakes and moved to Surprise, Ariz., a couple of years ago.

When he arrived, he found a true Western culture, he said, where people actually used and rode horses. And he also discovered that Arizona abounds with musicians.

In search of a way to set himself apart, he decided to put together a Johnny Cash tribute show. And it has been a hit, he said in a recent interview with the Daily Courier.

Christiansen and his ensemble will be in Prescott to perform their tribute to Cash from 2 to 4 p.m. Friday, July 4, in the gazebo on the courthouse plaza.

Christiansen has been a featured performer in the Prescott Opry shows at the Elks Theatre and Performing Arts Center and the Arizona Broadway Theater.

In Friday's show, Christiansen will portray the Man in Black with song and rhythm guitar, alongside Ken Killebrew on upright bass and lead guitar. Deanna Killebrew will bring June Carter Cash's music to life and add that special chemistry between Johnny and June.

This tribute show has been receiving widespread acclaim throughout the Arizona area, Christiansen said, with its renditions of "Folsom" to "Jackson," "Come Along and Ride This Train," "Ring of Fire," "Boy Named Sue," "Sunday Morning Coming Down," "Rock Island Line," "Big River," "I Walk the Line" and many more.

Of his move to Arizona, Christiansen says, "I feel like I should have been born and raised here."