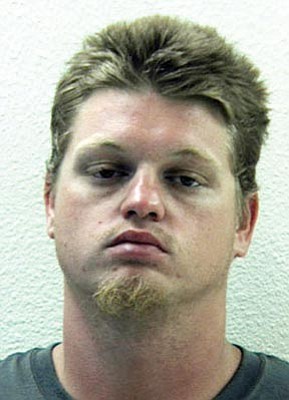 PRESCOTT - The last of three people arrested for burglary in the wake of evacuations during June 2013's Yarnell Hill fire accepted a plea deal Wednesday.

Yavapai County Sheriff's Office detectives and deputies, following up on an anonymous tip, apprehended Thomas Adams, 22, in July 2013 during a traffic stop in Prescott as part of an ongoing investigation into a residential burglary that occurred in Yarnell during the evacuation. The tip that led to the arrest indicated he was in possession of firearms stolen from an evacuated home in Yarnell, YCSO spokesman Dwight D'Evelyn said.

Adams was known to reside in Yarnell and is believed to be an accomplice of 27-year-old Dakota Slone of Yarnell, and 22-year-old transient Robert Frost, according to deputies. Both Frost and Slone were arrested July 11 at a motel in Prescott on multiple charges involving the burglary of a Yarnell home. The two were found to be in possession of items taken from the home upon their arrest, authorities said.

Adams' case was more complex because he was already on probation in two other crimes and had a second case pending involving sexual conduct with a minor.

On Wednesday, his attorney, Linda K. Moore, called the plea offered by the state "mathematically complicated." After some discussion and a recess to hash out the details, Adams agreed to plead guilty to third-degree attempted trafficking in stolen property, misconduct involving weapons by a prohibited possessor, theft of a firearm, and two counts of sexual conduct with a minor 15 or older.

Ainley said she would likely impose between 4.5 and seven years in prison, followed by probation.

All three defendants will be sentenced in February.