Column: One of the best events in tennis is coming soon 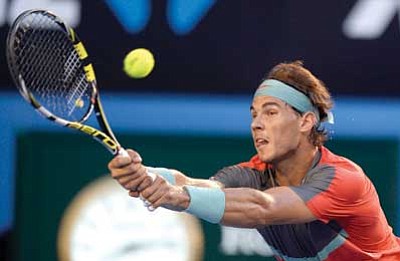 Okay, so the fifth largest tournament in the world, the 2014 BNP Paribas Open, really isn't a grand slam event. But in all regards it is.

In fact, this event offers so many special items and avenues of tennis entertainment that it supersedes much of what each of the four majors offers its fans.

Start with having all nine match courts with the Hawk-eye challenge system. Even the free qualifying rounds will use the Hawk-eye system. The second largest tennis stadium in the world that seats 16,100 ticket holders, and as of this year a new site expansion and second stadium that will hold 8,000 patrons per match, will have opened.

It does not offer an enclosed stadium, but most of the time the weather is superb in the Coachella Valley of California.

This fan- and player-friendly event has grown so much that tournament CEO Ray Moore stated the goal for this year is to attract over 500,000 people, which would put it on par with the majors in attendance. Last year's numbers were in the 370,000 range.

Nearly a billion homes will watch this tournament on television during its two-week duration. With a field of 96 players in both the men's and women's draws and more than 300 total players including the qualifying events, there's a lot of tennis to be played and watched. Add in the viewing of all the side courts and exercise fields where the top players in the world are warming up and practicing with their coaches and drill partners and this two weeks of tennis becomes a tennis enthusiast's paradise.

Don't forget the 32 player draws in both women's and men's doubles. It has been rumored that mixed events may round out this event in the near future.

But that's not all.

The parking is easy, the grounds are magnificent, the vendors are an enticement all their own in tennis apparel, equipment, one-of-a-kind items, tennis vacations, shade, rest, and people watching. Enormous video walls seem to be everywhere to keep you updated on match play when you're roaming the grounds or hitting the clean and spacious restrooms.

Would you like to experience hitting with the latest racquets, talk to racquet experts and stringing professionals, listen and watch top entertainment while sipping your favorite drink? Or observe past and present tennis professionals and industry icons being interviewed with questions you can pose? Then you need to be at this event.

This Indian Wells tournament is a who's who of players, present and past, coaches, tennis leaders, Hollywood types, writers, people who just love the game of tennis. You never know who you're going to walk by, eat next to, sit near or possibly chat with.

The prices are more than reasonable. Go to the qualifiers and it's free. So is the parking. From the first round to the quarterfinals you can pay as little as $38/$57 for general admission and from the semis on $65/$100. Naturally if you want great seats it costs more. Tickets can be purchased at www.bnpparibasopen.com or by calling 1-800-999-1585.

This year all the top players in the world in singles and doubles will be in the California desert oasis, and it seems that even Serena Williams might return, which would be a fan delight. Her coach, Patrick Mouratoglou, said that Williams had listed her name to leave open the possibility of playing, which was still not guaranteed.

Williams, the WTA Tour's top-ranked player, has not played in Indian Wells since 2001 when she was booed and heckled relentlessly during a final she won over Kim Clijsters. The crowd had turned on the Williams family after Venus Williams withdrew from a semifinal against Serena shortly before the match. When Venus walked down to her seat to watch the final along with her father, Richard, she was booed, and Richard said he heard racial slurs aimed at him.

Much has changed in the world of tennis in the last 13 years and there's no doubt that all the players will be honored, respected and cheered for in a manner worthy of the effort they put forth with their hard work ethics, good sportsmanship and special skill sets.

PS - The grand opening of the new Stadium 2 will be unveiled Saturday, March 1, at 6:30 p.m. with the McEnroe Challenge for Charity, and it's free to attend. John McEnroe will play against Jim Courier in a singles match, followed by a doubles with McEnroe/Keith Fleming vs. Courier/Rick Leach.