What students get, and what they don't, in charter schools 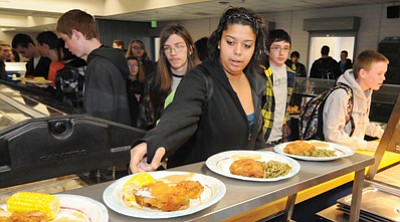 Les Stukenberg/The Daily Courier<br /><br /><!-- 1upcrlf2 -->Destanie Dennis, a junior a Prescott High School, grabs a hot lunch in the cafeteria, an option not always available in charter schools. Below, students load on buses after a day of learning at Liberty Traditional School in Prescott Valley.

Who can operate a charter school, and how those schools operate, continues to evolve.

Offerings at charter schools, such as athletics and lunch programs, can be different in each school. Teaching requirements, which doesn't always include state certification, can vary in charter schools as well.

"We have oversight responsibility for the schools we authorize," Rowe said. "Those schools have reporting requirements, not only to the Department of Education, but also to the state Board for Charter Schools."

While the state Board for Charter Schools is the primary authorizing entity for schools in Arizona, universities also have permission to authorize charter schools. Community colleges, within specific statutes, as well as school districts, also can authorize, which makes them responsible for overseeing the school, Rowe said.

"A number of schools this year, across the state, actually converted some of their existing schools into charter schools," Rowe said.

"Basically the process is outlined in statute that allows a local district governing board to apply to establish a district-sponsored charter school," Carter said.

Statutory direction on how those charters are operated, however, is unclear, he said. The county school superintendent's office, with the Arizona Association of County School Superintendents, have subsequently asked the county attorney and the auditor general for guidance on the matter.

"In effect, do we treat them like districts, like charters, or like a hybrid of some sort? We are expecting those opinions any day now," Carter said.

The differences between charters and district schools, Rowe said, varies from school to school:

• District schools are required to provide transportation, for example, while charter schools are not, Rowe said.

• Charter schools also are not required to participate in a hot lunch program, though some do.

"It depends upon the school, and it's part of the choices a charter school has in its operations, and a choice parents have in selecting any school." Rowe said. "If I need transportation, then I probably want to enroll my child in a school that provides transportation to that school. The same would be true with a breakfast or a lunch program."

"A charter school can choose to have, not only athletic programs, but other extra-curricular activities, but doesn't have to have them," Rowe said.

At Franklin Phonetic School, for instance, the Franklin Falcons compete in flag football, basketball, volleyball, track and cross-country against other local charter schools from the quad-city area.

Eileen Sigmund, president and CEO of Arizona Charter Schools Association, said there's no statutory definition as to how sports are offered at charters.

"There is no one size fits all answer," Sigmund said.

• State teaching certification is required for district schools, but is not mandatory at all charter schools. Some charters do require, however, that teachers be experts in the field they teach.

• Funding formulas vary from charter schools to district schools. Dollar-to-dollar comparisons, she said, depend on student enrollment, grade levels offered at the school, and the size of the school. Some schools, she said, receive additional money for being a small school. Unlike district schools, charters also do not have access to money for new school buildings through the School Facilities Board.

• Charter schools cannot opt for voter-approved bond and override tax dollars, though both can apply for federal grants. Charter schools also can solicit and receive donations.

Mary Ellen Halvorson, superintendent for Tri-City College Prep High School in Prescott, said that, while many charters bring in more state money per student than district schools, charter schools do not receive additional money in other areas, such as transportation. Total student funding, she said, shows a disparity between money for charter students when compared to students in district schools.

"It is not really equitable in the state of Arizona how funding goes," Halvorson said. "Charter schools do get a higher percentage on their average daily membership. However, since charter schools do not get all these other things, in the long run charter schools get less than districts."