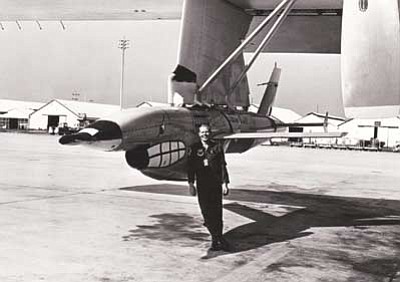 Courtesy photo<br>Col. John Dale in his active-duty days poses with a drone ready for action.

PRESCOTT - Drones, or unmanned aerial vehicles (UAVs), are a hot-button topic right now, but the truth is, they've been around and in active military use for decades.

One of the experts in early UAV technology, Col. John Dale, USAF retired, explained Wednesday night at Embry-Riddle Aeronautical University's Davis Auditorium how and why drones were used by the Strategic Air Command (SAC) in the 1960s.

Then, as now, the goal was pilot safety while still achieving the goal of collecting intelligence photos. When U-2 spy planes, previously thought to be untouchable, were shot down, programs named "Lightning Bug" and "Compass Cookie" were developed, using target drones retrofitted with film cameras.

Dale, who was director of reconnaissance for SAC's 15th Air Force HQ, began his presentation by noting that much of his material had been secret, but that it had recently been de-classified, "or I wouldn't be able to let you leave here alive."

He delighted in describing how his unit's small and highly maneuverable drones confounded enemy MiG fighters from China, North Korea, and over Vietnam.

"This is fun, when you can sit down... and play games with their minds," he said, pointing out that human pilots couldn't risk such games.

And, although the unarmed craft were expendable, they were hard to kill, he said.

"We were at 1,000 feet," he said, being pursued by two fighter jets, when one launched an air-to-air missile at the drone. "It went right up the tailpipe of the lead (fighter)," he said, to laughter from the crowd. "Blew the lead right out of the sky."

The small UAVs were dropped from the wings of DC-130 cargo planes, then tracked and controlled by a crew in a truck trailer, and could be landed by parachute.

"One of the things that is not said anywhere is, from October 1968 to November 1972 - four years - we were the only aircraft flying in North Vietnam," Dale said.

Thanks to CIA backing, "we were able to do so much for so long, because there weren't any politicians involved," he said.

Later, the Air Force began adding modifications to the drones like larger

fuel tanks, lighter airframes, and defensive systems, called HATRAC for High Altitude Threat Reaction and Countermeasures, he said. One improvement was to sync the cameras to the vibrations of the drones, which resulted in the ability to spot very small targets - down to an inch across - from the air.

The end of the SAC drone program came when "(then-President Richard) Nixon started playing ping-pong with the Chinese" and vowed to stop spying on them, Dale said.

Although some other nations, notably Israel, wanted the drones, "the administration said, 'Cut them up,'" he recounted.

"It was an expensive program, let me tell you."