Some sheriffs willing to house state prisoners; Mascher says no 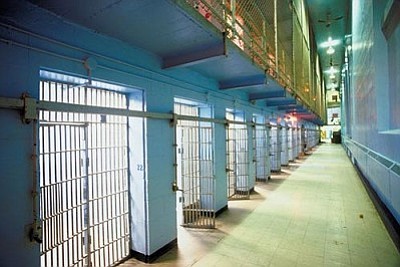 Some sheriff's offices in Arizona say they could house state inmates in county jails for millions of dollars less per year than it would cost to move inmates to a new private prison.

Sheriff's offices in Maricopa, Apache, Pinal, Cochise, Navajo and Santa Cruz counties would be willing to take Arizona Department of Corrections prisoners after the Arizona Republic reported that the state this month would begin housing inmates at the privately held Red Rock Correctional Center near Eloy.

Some sheriffs and other critics say private prisons are a waste of state resources and funnel tax dollars into the bottom line of companies that pay their top executives seven figures. The state guarantees owner Corrections Corporation of America a profit with an occupancy rate of at least 90 percent at the new facility.

"The state should be supporting the counties and not try competing against them," said Brannon Eager, the Apache County sheriff's chief deputy. "It's obvious the existing sheriffs' jails could house inmates cheaper than private prisons."

But the Department of Corrections said it's not interested in spreading its inmates in county jails around Arizona. Spokesman Doug Nick said it's unlikely jails can provide the same kind of education and rehabilitation programs. He also said all able-bodied inmates have work opportunities in state and private prisons.

"Our job is to incarcerate prisoners. If we can work with the counties, we will, but we need to manage our inmate population with our programs," Nick said. "A county sheriff's office is not designed to be a mini Department of Corrections. They have mostly people who have not been convicted of a crime as they are going through a trial process."

Steve Owen, a spokesman for Nashville-based Corrections Corporation of America, agreed. "Long-term felons have much different needs than those in a jail," Owen said. "They are talking about three hots (meals) and a cot. ... But those offenders are not going to get the same level of rehabilitation."

Five sheriffs said they could provide similar services to the state for less than the $65.43 daily rate per inmate being paid to CCA for prisoners at Red Rock. Pinal County Sheriff Paul Babeu said his county's cost would be higher because of additional programming requirements for state inmates.

Sheriffs from Coconino, Graham, Gila, Greenlee, Pima, Yavapai and Yuma counties either don't have space or aren't interested in housing state inmates, the Republic reported. The La Paz and Mohave County sheriffs could not be reached.

The state, within six weeks, plans to have at least 500 prisoners at Red Rock.

Corrections Director Charles Ryan said he will seek legislative approval to fill the remaining 500 beds at the private prison in 2014 instead of next year, as previously planned, to alleviate overcrowding elsewhere in the system.