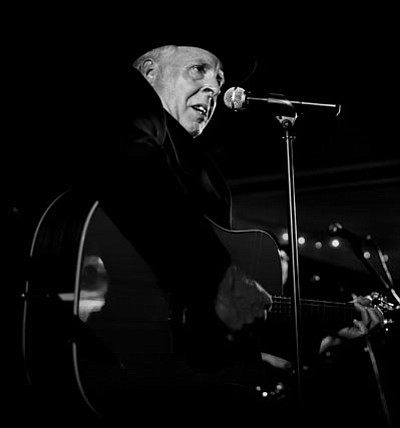 "Home at last" is the expression that comes to mind when you hear musician Steve Christiansen talk about his move to Arizona from polar Minnesota.

For instance, he said he visited his roots for the Christmas holiday, and reveled in the sunshine and warmth of Arizona when he stepped off the plane in Phoenix.

Christiansen moved to the Grand Canyon State two years ago and now lives in Surprise. He not only loves the climate but he also takes great pleasure in being in the West, where classic country music abounds.

"It's been a thrill to come from the land of Swedish rock and roll and polkas. It's so much fun to be where country is totally accepted. I tried my darndest for 35 years" to persuade people toward his favorite genre, he said. "If you had songs about cows," the Minnesota farm boy said, pointing to the legendary song, "Ghost Riders in the Sky," country music might have gone over better in that state. "But it's hard to ride cows," he noted. "Here, people own horses and use horses. It's a whole different scenario here. You get to the roots of country. I feel like I should have been born and raised here."

Christiansen will exhibit his exuberance for country classics when he appears with the Prescott Opry performers 7 p.m. Thursday at the Elks Opera House. Tickets are $17, with group, student and senior discounts available. To order tickets, call the opera house box office at 777-1370 or go online to elksoperahouse.com. Tickets are also on sale one hour before show time.

When Christiansen arrived in Arizona, he found a flood of musicians in this state. He needed a way to distinguish himself from the crowd of artists, he said, so an idea to put together a show that pays tribute to Johnny Cash came to him. He has put together an ensemble that includes himself, singing and playing guitar, Kenny Killebrew on bass, lead guitar and mandolin, and special discovery Deanna Killebrew, a singer who is the show's June Carter Cash.

The group has been playing to sold-out crowds in the Valley, he said.

After one particular show, a woman in the audience told him, "I've never been a fan of Johnny Cash, but I am now."

Another of the Opry performers to take the stage Thursday will be 13-year-old (he is almost 14, as he made clear) Keenan Hammack, who will entertain with his guitar.

About two years ago, he got "bored" one day when there was no television to watch and picked up his father Brian's guitar and started strumming. Opry folks say, "Prepare to be blown away by Keenan's instrumental genius."

A member of the Sharlot Hall Museum Generation Band, Keenan is an eighth-grader at Granite Mountain Middle School.

Both his parents have nurtured his talent, he said, adding his father taught him to play his first song, classic rock trio Emerson, Lake and Palmer's "From the Beginning."

Keenan's first teacher was his father, but now he studies with Drew Hall, "a really good guitarist," he said.

Keenan likes all kinds of music and tries to keep himself open to playing all genres.

On Thursday, he will perform a medley - John Hartford's

"Presbyterian Guitar" and his father's song, "Tell Me Something" - along with "Wizard Walk" and "It's a Sin to Tell a Lie."

Keenan says he enjoys playing his guitar because "It's something you can do that's time-consuming but not a waste of time.