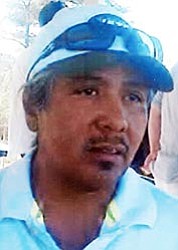 Lonnie Gaylen Morgan Jr. was called home to be with his Lord and Savior in the early morning hours of Jan. 2, 2014 at his home in Prescott, Ariz. with his wife and children by his side.

Lonnie was born April 25, 1959 in Prescott, Ariz. to Georgianna James and Lonnie Morgan. Lonnie spent his early childhood on the reservation in Clarkdale, Ariz. with his treasured grandparents, Leonard and Ima James, and his young adult life in Las Vegas, Nev.

After returning to Prescott in 1988, Lonnie started working for the Yavapai Prescott Indian Tribe in various departments, eventually settling into the cultural research department as a para-archeologist. He had a deep passion for Native American archeology and loved nothing more than spending countless hours searching for undiscovered archeological sites. Lonnie had many jobs in his life, but none that he valued more than working for his tribe and preserving its precious culture for future generations. He took great pride in his Hopi and Yavapai heritage and was a proud member of the Yavapai Prescott Indian Tribe.

Lonnie was the oldest of five children. He prided himself on being the oldest member of the "James Gang" grandchildren. Family was everything to Lonnie and he loved them all dearly. Lonnie especially loved spending time with all his "cuzzins." He loved to play tennis, softball, golf and was an avid New York Jets fan since childhood. One of his favorite things to do was to just go cruising around town, listening to music seeing where the road led him. Lonnie was an extremely intelligent man with a unique sense of humor, loyal disposition, spontaneous, adventurous spirit and generous heart. To know Lonnie was to love him.

Lonnie became a father for the first time in 1979 when his beloved son Little Lonnie entered the world. Words cannot express the strong, close bond Lonnie and Little Lonnie shared. In 2000, Lonnie settled down and married his wife Martha. They started a family and had four incredible children together. Lonnie treasured his role as their father, loved spending time with his kids and was very proud of them. They meant everything to him and he was completely devoted to his family. Lonnie accomplished a lot in his life, but he considered his family to be, by far, his greatest accomplishment. Even as he struggled in the last several years of his life, Lonnie was the thread that held his family together.

Lonnie will be sorely missed and forever cherished in the hearts of all those who were lucky enough to know and love him. He was and always will be the heart and soul of his family.

The family would like to say a special thank you to Prescott Family Care Hospice and all of Lonnie's wonderful caregivers over the last several years of his life.

Visitation is from 5 to 7 p.m. Jan. 9, 2014, at the Arizona Ruffner Wakelin Funeral Home, 303 S. Cortez, Prescott. Services will be at 11 a.m. Jan. 10, 2014, at the First Church of the Nazarene, 2110 Willow Creek Road, Prescott. Burial will be at Yavapai Prescott Tribal Cemetery with a potluck to follow at the Yavapai Gathering Center.

Family requests no flowers. In lieu of flowers, donations will be accepted to the Lonnie Morgan Junior Memorial Account to benefit his children at any Wells Fargo bank.